They Lost the D 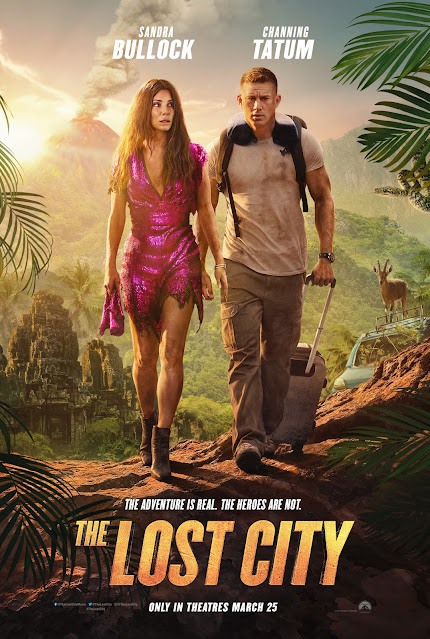 The trailer for The Lost City -- formerly titled The Lost City of D (IMDb even still has it listed that way) but I guess they work-shopped their dick joke right on out of there -- starring Sandy Bullock and Channy Tatum as a bickering romance novelist and her pretty-boy Fabio-type cover-boy respectively, is here, and it's exactly what you expected, if what you expected was a riff on Romancing the Stone with a lot of Channing's muscles on display. There's a shot of him shirtless in the trailer but he's covered with leeches and it grosses me out, so...

...  let's just stare at this perfectly lovely and leech-free gif of his arms instead. To paraphrase that famous pig, "Some arms!" The Lost City, which was directed by Adam and Aaron Nee (who are supposed to be making the He-Man movie next but we've heard about a He-Man movie for so many years we're taking that one with a grain of Eternian salt) is out on March 25th. Here's the trailer!
Tell me what you think in the comments.
And okay yeah fine here's leechy shirtless Chan:

Romancing the Stone reboot most welcome, but the Brad Pitt cameo they should have saved. Hopefully it won't be the only cameo? The age difference between them is a reverse from Romancing the Stone, too, goodie. I want romcom adventure ridiculousness come 2022.

Yeah, this actually made me LOL. I'm in.

Tatum seems like a nice guy who should be doing community theatre and painting houses. He's never anything less than dull.

How much you wanna bet that shirtless scene of Tatum will be the best part of the movie?