I Sin You Sin We All Sin For Verhoeven 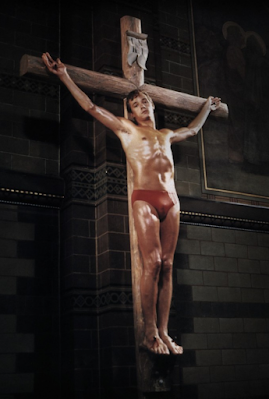 Using an image for this news from the Paul Verhoeven's 1983 film The 4th Man just because I want to look at that image from the Paul Verhoeven's 1983 film The 4th Man -- the news has to do with Verhoeven, not The 4th Man, but I think we're all okay with this. Right? So everybody's favorite dirty Dutch grandpa has announced what he's working on next now that his lesbian nun epic Benedetta (which I reviewed here) is out in theaters -- it's called Young Sinner and it's an erotic thriller set in Washington D.C. and it'll see him re-teaming with Edward Neumeier, the screenwriter of Starship Troopers & Robocop. Says the latter:

"Our heroine, a young staffer who works for a powerful Senator, is drawn into a web of international intrigue and danger, and of course there is also a little sex."

Of course! A little, a lot -- let's go with a lot. Anyway you know this makes me realize -- I have been in a lousy mood lately and what I need to do is have myself a little Verhoeven-a-thon. That always cheers me up. Like I haven't seen his movie Soldier of Orange in ages (sidenote: hey Criterion, Soldier of Orange is dying for a good release here in the US) -- a double-feature of that with Black Book? Forget about it! Mood fixed! Anyway back to Young Sinner -- what actress would y'all like to see Verhoeven work with on this? I know who I want...

Dominique Jackson as an femme fatale foil to the young heroine

The 4th Man is one wild ride of a movie with Renee Soutendijk exquisite in the lead.

I just finished the Paul Verhoeven collection on DVD. I want to see Soldier of Orange but Netflix couldn't ship it and the local library only has it with 5 of his movies. The 1st 3 are very odd and there is some full frontal.