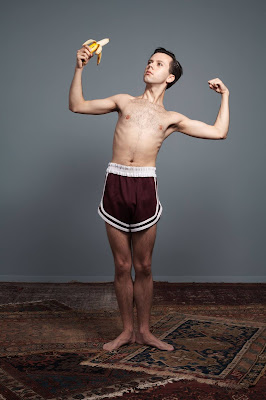 Don't think I will hear any news today more exciting than the news Deadline reported a bit earlier -- that queer comics Jeffrey Self and Cole Escola (from Chassie Tucker to the killer twink on Search Party we fucking love Cole) have just gotten a series green-lit for HBO Max! It's called Bunny & Clyde and here's how they sell it:

"In Bunny & Clyde, two lost and codependent souls — Clyde (Self), a broken gay thirtysomething in the midst of an unmedicated bipolar episode, and Bunny (Escola), a non-binary, self-identifying cabaret star – get a once-in-a-lifetime opportunity to reinvent themselves and a second chance at happiness. But not until they first live in a dead man’s house, assume new identities and convince an entire Palm Springs community that the guy is still alive while they sell off his estate."

So basically we're talking Weekend At Bernies but way way gayer. In other words, the way Weekend At Bernies was intended! (I mean come on -- Jonathan Silverman???) Anyway I won't bother to say "this sounds tailor-made to these comedians sensibilities" like I almost did because a-fuckin-duh, they tailor-made this themselves to their own sensibilities. Listen I am tired today. They can't all be gems. My point is I want this right now. So glad we're finally getting real queer projects from real queers!

This sounds like it may have developed from Pee Pee Manor.