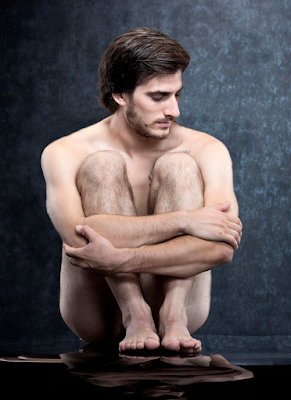 When I stumbled upon this photo of The Old Guard and Martin Eden actor Luca Marinelli last night my first thought was this is too good to be true, that it must be photoshopped -- and it turns out I was right, only not entirely. That is actually a photo of him, just the original version (seen here) also had the actress Alba Rohrwacher in it. They were in a movie together in The Solitude of Prime Numbers and this was a promotional image for it (and there's actually another photo right here) -- anybody seen the film? No matter, we love Luca -- check our Luca archives for lots more of him, most especially this big gratuitous post here. I can't wait for the supposedly forthcoming Old Guard sequel so we can see him reunited with his forever lover Marwan Kenzari -- step aside, Eternals, they're the hottest eternal couple of all time.