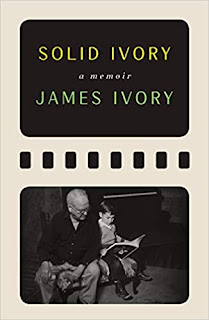 "Shia LaBeouf was also dropped like that. He had been contacted for the part of Oliver. At this, I was doubtful. I didn’t know much about him, so I watched some of his films. He’s an extremely good actor. But as an academic writing about the Greek philosopher Heraclitus, he would be a stretch. Well, I thought, he would be a sort of diamond-in-the-rough-scholar type, like my friend Bruce Anawalt. Shia came to read for us in New York with Timothée Chalamet, paying for his own plane ticket, and Luca and I had been blown away. The reading by the two young actors had been sensational; they made a very convincing hot couple. But then, too, Shia was dropped. He had had some bad publicity. He’d fought with his girlfriend; he’d fended off the police somewhere when they had tried to calm him down. And Luca would not call him, or his agent. I emailed Shia to offer reassurance, but then Luca cast Armie Hammer and never spoke to, or of, Shia again."

A long excerpt from writer-director James Ivory's forthcoming memoir Solid Ivory (which is out on Tuesday) has been published in GQ today -- the excerpt is entirely about the making of Call Me By Your Name and the tension between him and director Luca Guadagnino, who'd promised Ivory a co-directing job on the film and then at the absolute last minute snatched that duty away. There's plenty of gossip shared including the above passage, talking about how Shia LaBeouf almost got the "Oliver" role, which was something we already knew but it's a fascinating thought experiment, trying to picture the "hot couple" he and Timmy apparently made. 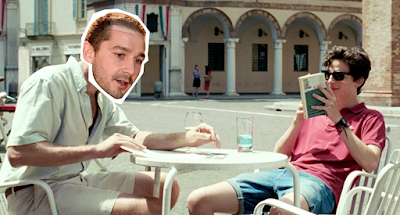 Also I find it interesting that Ivory plays down the police incident involving Shia, which I think was the one where he yelled "fag" in a crowded Broadway theater. Then later Ivory again takes the chance to complain about the lack of dick in the film, but we've heard him play that tune often enough at this point and I'm over that. Anyway the book sounds like a great read -- dunno if you've heard but James Ivory can turn a phrase -- so let's all pick up a copy next week and read it together!
Who? Jason Adams When? 2:32 PM
Labels: Armie Hammer, Call Me By Your Name, Luca Guadagnino, Timothée Chalamet

Yes, Shia as Oliver is an interesting thought experiment, but I'm also now imagining Shia playing Elio as the boy on Even Stevens aged up a few years and practically crying laughing.

The real story here is the untold history of James Ivory and Ishmail Merchant. There's got to be a whole miniseries you can make out of their life together. When he passed in 2005, I had been a longtime fan. Roger Ebert wrote a memorial article on his blog and mentioned at the end that Merchant was survived by his husband James Ivory among other family members. I flipped out. Never knew that they were a couple. So I commented on the article asking Ebert if he just outed them. He replied, that it everyone knew this. Haha. Except me of course.

Thought of you immediately when I read the excerpt. I’m glad you already knew about the alternative casting, I was very concerned for your well being. :)

Honestly - I absolutely think Shia would have given Oliver a stronger carnal undercurrent and that would have been very cool.