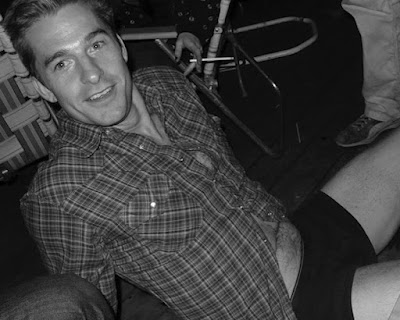 Been awhile since I checked in on Scott Speedman -- been so long I didn't even know he had started an Instagram account, but he did, and yesterday he shared this photo (under the auspices that Drew Barrymore shared that photo with her audience on her talk show -- way to deflect the need-for-thirst, Scott), and for this we are grateful no matter the circuitous route. Anyway I was about to be like, "What the hell's Scott been up to?" but thankfully I run a movie-blog and I have posted myself what he's up to, but just forgot. He's in the next David Cronenberg movie! A new version of one of DC's earliest films Crimes of the Future -- I actually think all it might share will be a title, but we'll find out soon enough since IMDb has it listed as being in "post-production" when I don't know if I even knew it had shot. Anyway other names in the cast are Cronenberg regular Viggo Mortensen alongside Kristen Stewart and Léa Seydoux -- this is one sexy cool cast y'all.
Who? Jason Adams When? 9:00 AM
Labels: David Cronenberg, gratuitous, Scott Speedman, Viggo Mortensen

Funny, I just binged the latest season of You, and he's in that, as well as the last episode of Grey's Anatomy.

You is probably why he was on Drew Barrymore's show then, I would guess. People love that show. (I haven't watched it, even though I do love Penn.)

I might just watch the bits with him because I did not love it. I am glad for whatever role it played in bringing that crap comics predation to light though. It serves as a good public safety video in general, Penn was great and season 2 leading lady was excellent.

What a gorgeous man...I speed through Gray's Anatomy-gets too soapy and they whine a lot-saw him and almost fell out of my chair...The camera loves him...

You is a terrific guilty pleasure. I watched and was surprised at how entertaining the first season was on AMC, I'm so happy to see it without commercials on Netflix now. Some critics and some audiences apparently have been a bit disappointed by this third season but for me it's good binge material. Beautifully shot too. And Jason with your love of book shelves and bookstores(?) you should definitely watch the first season.