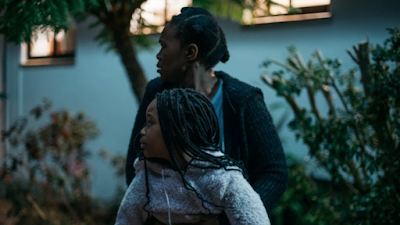 We don't quite have a handle on the strained relationships and creeptastic traumas that form the tangled heart of Good Madam (Mlungu Wam) until well into its runtime. When we first meet Tsidi (Chumisa Cosa) she seems strong, smart, and capable, hefting a mighty bullshit-detector around with her -- all the better to say "Peace, out" with when a storm cloud of smiling hypocrite relatives descend on the home she's lived in with her just-deceased grandmother since childhood. She doesn't have the power in the situation and they all but force her out -- leaving is her way of seizing some control. She also seizes her grandmother's favorite coat on the way out the door, because fuck them.
Tsidi grabs her adolescent daughter Winnie (Kamvalethu Jonas Raziya) and reluctantly heads off to stay with her own estranged mother Mavis (Nosipho Mtebe), who's been the life-long live-in housekeeper for a rich white lady (the good madam of the title). And here's where Good Madam introduces the historical and political space that it's about to be keen on dissecting -- post-Apartheid South Africa, where the generational change between the experience of a child and that of their parent is as wide as ocean itself. Mavis is tied to the past, not exactly a slave but entirely subservient and dependent on her madam's bedridden graces, while her daughter, flailing about the way free people do, is living the uncertain life of modernity, with its inherent trade-offs.
And these tensions will inevitably come to a big ol' boil as Good Madam tippy-toes toward its climax -- the free generations smashing up sugar bowls while the older one scrub the floors and get buried in the backyard under some overgrown trees as eternal payment for services rendered. Tsidi, far more heartbroken than we realize at first glance, becomes somewhat of an unreliable narrator as the film courses along -- this fancy house brings with it bad memories of her own childhood; when her daughter asks her why she doesn't like this place she replies that this place doesn't like her. Enter an estranged half-brother who Tsidi's mother gave away to be raised by the white folks and slowly you get the picture of how claustrophobic and strangling this beautiful beige suburban home is under its surface, and that's even before Tsidi digs up what she calls a curse about eternal servitude from the middle of a set-aside book.
Indeed the cloistered air of this house of dying -- where the madam reigns half-glimpsed from her bed, heaving every breath a la original Suspiria's spittle-choked Mother Marcos -- begins to infect all those who enter. Winnie, seen early on as a good girl, becomes petulant and demanding, the white privilege of the place seemingly coating her person like a poisonous film. Tsidi's even worse though, paranoia leaking into her imaginings, hallucinations and dreams of dead white dogs and bloody teeth winding her too tight to breath. I think some of Good Madam's finale might have gotten lost in translation -- I was more confused by a couple of its revelations than I think I should have been, and I'm not sure if it's just my own unfamiliarity with the spiritual and supernatural customs of this place and people or if the film is being vague on purpose, or by accident -- but its riddles are unsettling nevertheless, its performances acute and sharply drawn; this is a good movie about bad madams and how the horrors of the past echo across the present flesh. Very much recommended. 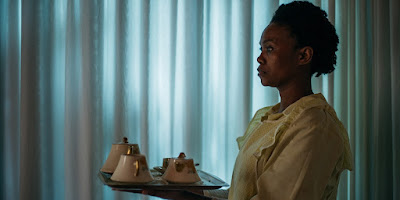