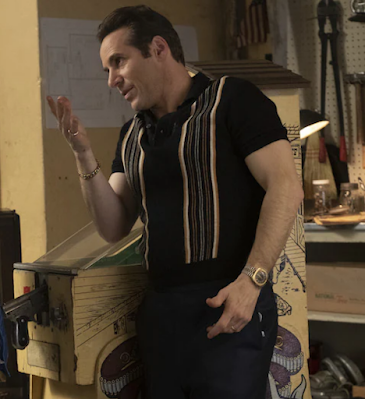 If any of you watched the Sopranos prequel film The Many Saints of Newark this weekend, in theaters or on HBO Max, then perhaps you'll want to read my review of it, which went up today at Pajiba. Hell maybe you'll want to read my review even if you didn't watch the movie? I am pretty awesome all on my own, so that would be understandable. I found the film to be a mixed bag -- in that even calling it a "film" sort of feels like a stretch -- but I also think every single actor in it is terrific, especially Alessandro Nivola in the lead. So flaws aside there are plenty of reasons to watch it, is my point. Even just gratuitously speaking...

Feel as if it is my duty to share this gif of Billy Magnussen in tight mustard trousers in #TheManySaintsOfNewark pic.twitter.com/FobUhHQV8M