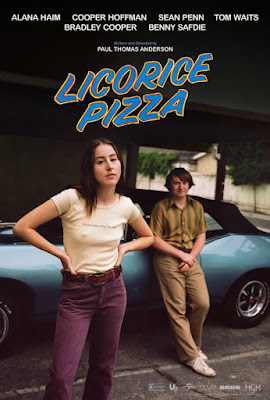 Big day for those of us who continue to worship the ground that writer-director Paul Thomas Anderson walks, as the poster and the trailer for his next one, somehow absurdly trollingly titled Licorice Pizza, has arrived. The movie comes out in limited release at Thanksgiving and then wide release for Christmas, and the trailer has me over the moon excited. And not just because PTA ...

... put his amazing wife in this! (That clearly doesn't hurt though.) Me and PTA have had a rocky road the past decade, I'll admit. It took awhile for The Master to grow on me (it has) and I haven't had any desire to watch Inherent Vice a second time since my first view at NYFF in 2014 (I probably should) but everything he's done since -- the Jonny Greenwood doc Junun, his Thom Yorke short film Anima, and of course Phantom Thread, which has worked up to being My Favorite Paul Thomas Anderson Film in just three short years -- reinvigorated my passion. Watch this trailer and feel yourself reinvigorated too!

Licorice Pizza was a record store chain when I was a kid, so a vinyl record is all I associate this with. Is there something else to the title I’m missing?

I've honestly never heard that term before, thanks for the education!

Honestly kind of mixed on Anderson. Obviously talented but I haven’t LOVED anything of his since Punch Drunk Love.

I remember licorice pizza. I was too young to be a customer but the name always stuck in my head. Phantom Thread was powerful. I think it's his best as well.

If the movie’s about skeevey characters in the Valley in the 70s, Licorice Pizza is the perfect name. But maybe you had to be there….