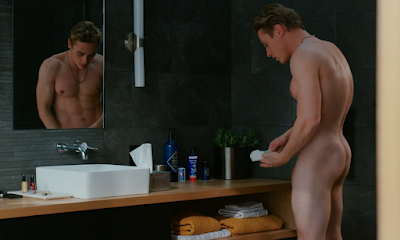 I'm not going to post a bunch of caps of Ben Hardy in The Voyeurs -- a Rear-Window-esque erotic thriller starring him and The White Lotus actress Sydney Sweeney that just hit Prime Video today --  because I haven't been able to watch the film myself yet! And given the fact that TIFF is now officially in full swing I'm not sure when I will. But you're welcome for that one above, and there are more out there on the internet if you know where to look. For now I'll just share the trailer below just in case you have no idea what I'm talking about -- and I wouldn't blame you if you don't given our general glut of content; I didn't know this was a thing until this week myself! And I will also share with you a (second) reminder -- TIFF is not happening, I'm about to be very very busy. Very very! Don't expect a lot from me. (In general, a good rule.)
Who? Jason Adams When? 9:50 AM
Labels: Anatomy IN a Scene, Ben Hardy, gratuitous, TIFF

OMG You can totally see the silhouette and it's gorgeous