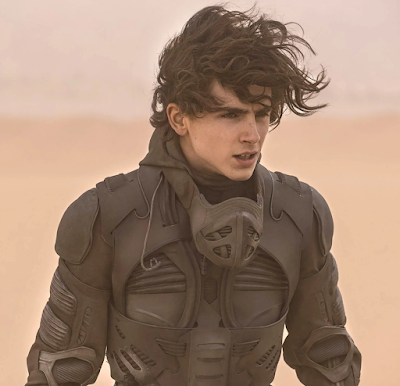 Big weekend for Dune fans as the film will be having its long long loooong awaited World Premiere at the Venice Film Festival tomorrow -- I'll probably be forced to see some reactions on Twitter but I'm doing my best to avoid them before its NYFF screening in a few weeks (fingers crossed, considering I haven't gotten NYFF approved yet). Anyway in anticipation of people getting their eyeballs on this flick for the first time they dropped a new clip, which you can see over at Vanity Fair. In other news I've got a screening this afternoon -- no it is not Dune, but it is one I have been wanting to see for awhile now -- and I'll be offline for the rest of the day. So, you know, bye. See ya Monday.

Who knew all ya need is Oscar Isaac in a red t-shirt pic.twitter.com/G3LvS3rRzw

I wonder if the series of films will get far enough along that they get to the point...

When The character Timothée plays, Leto II, transforms into a sand worm. Well, body of a sand worm, he keeps his face... thousands of years into the future from the time of the initial movie.