I cannot in wholly good faith recommend you watch Ivan Passer's 1981 "neo-noir" Cutter's Way, which is now streaming as part of Criterion's "Neo-Noir" series -- which has proved to be an excellent series on there, one of their best -- because Cutter's Way ain't great. Oh its leading man Jeff Bridges certainly looks phenomenal, as you can see there -- indeed I'd say that alongside Richard Gere in American Gigolo in 1980 and William Hurt in Body Heat, also in 1981, that Bridges fills out the trinity of sweaty sorta-sleazy WASPishly sharp-dressed early-80s men. 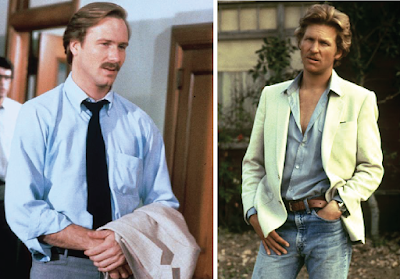 And that might be enough reason to watch the movie on its own -- it got me through it! But other than the noted pleasure of Bridges, his mustache, his beach sweaters, there's not much to recommend... more of recommendation's opposite. For example, and primarily, John Heard gives one of the screen's most irritating performances as Bridges' bestie, the titular Cutter. The character is supposed to be a mess who ruins everybody's lives but Heard forgot to give us anything else and instead dialed "dickhead" up to fourteen. Absolutely exhausting to watch, and you actively recoil from the screen when he pops up. Which is constantly.

And I say that as someone who has found Heard extremely charming in numerous roles before. (I will always think of him as the sleepy theater-director who Bette Midler croons to from a bunny suit in Beaches.) But back to Bridges -- ogling him at his near-peak (which I'd say he reached three years after this in another bad movie, Against All Odds -- but perhaps you've got another pick?) isn't a negligible past-time, so maybe the movie will work for you on that alone. In that spirit let's do some more (and these gifs are from just the opening scene -- there's a lot more Jeff to be ogled later in the film), after the jump...

He does look great here. While I have a soft spot for White Squall Jeff he did have quite a long period of full-on lusciousness.

I've seen this film but so long ago I barely remember it and nothing about John Heard's performance. Surprising to hear that he's so completely grating, he was usually a more subdued, skillful actor but we all have our off days I guess. He was quite attractive in his youth as well.

Didn't watch either one but, mustache's pretty much a turn-off so, yeah... 😏🤷‍♂️

I can't even deal with how hot JB was during this period. Sometimes I wonder to myself if the children even know that THIS existed for a time. Just so incredibly hot.

I recommend The Morning After (tho Jane Fonda's hair and outfits especially her hunter green pants suit are the star) for JB and then Starman where we get him au natural.

Jeff Bridges was EVERYTHING in the 80s. From the movies that I've seen. Not from actually being there.

Can we agree Lisa Eichorn is sensational in it.