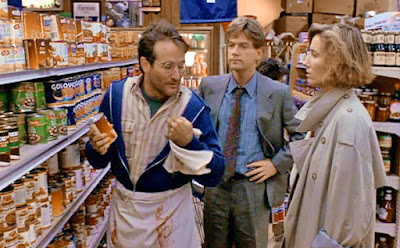 Cozy Carlisle: Hey, thumbdick, I was a damn good shrink. Nineteen years I worked with a lot of people through a lot of shit. OK, I slept with a patient or two. It's not like I didn't care about them. I loved being a doctor. I used to not charge half my patients. Then the fucking state comes along, they send in some bitch undercover, and I'm fucked. Life isn't fair, is it?

I was obsessed with Kenneth Branagh's reincarnation-thriller film Dead Again back in the early 90s when I was first getting obsessed with movies, but you should believe me when I saw I haven't seen it in ages and ages because I had literally no recollection of Robin Williams having been in the movie until I went and looked at IMDb's "Quotes" page for the movie today, here on the occasion of its 30th anniversary. Every quote they have listed is from his character, who it should be noted is named "Cozy Carlisle" (!!!), and I had entirely forgot about him. And here he is screaming "thumbdick" -- I should not have forgotten this. In my memory this movie is a swooning psycho romance thing with Emma Thompson slumming it in a fun way, and lots of overheated scissors imagery, but it's also a "Robin William screams thumbdick" movie, huh. Anyway Paramount is putting this movie out on blu-ray later this fall, in October, you can pre-order it here. I think it's maybe due a re-watch!

My favorite part of this film was the moment Derek Jacobi stuttered - in a not-so-subtle nod to his character in I, Claudius.

One of my favorites.

Don't forget the creepy scene of an aged Andy Garcia asking for a cigarette and then smoking it through his throat tracheostomy.

Or a pre-Harry Potter Miriam Margolyse's voice changing from a little girl to an old woman in an instance.

So much mood in the film with great cameos.

In my opinion a much underrated movie. So many great moments. I still jump when he says he won’t hurt her. Derek Jacobie’s moue of disgust at unreliable antiques. When I saw it in the theater the woman in front of me turned 180’ in seat at the end, not the most subtle foreshadowing.