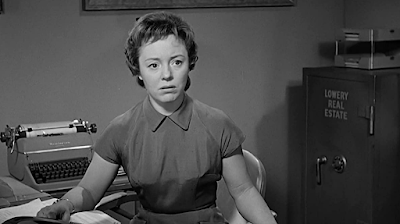 Caroline: He was flirting with you.
I guess he noticed my wedding ring.

Patricia Hitchcock has a lot of wonderful lines in her father's films Stage Fright -- where she played MNPP mascot "Chubby Bannister" whose presence has blessed the right-hand column of this site since inception, scan down to the bottom if you've never noticed! -- and Strangers on a Train especially. (Her giddiness over crime solving, mocking her father's own preoccupations, is infectious in the latter film.) But I imagine it's her work in just a couple of minutes of Psycho that most of us picture when we think of her -- playing Marion Crane's busybody co-worker in the opening scenes at the office she steals her every moment and wrings tip top hilarity from her every bit. Psycho doesn't get enough credit for being as funny as it is -- even after the shower scene! -- and Pat sets the stage for that dark humor early on. The film wouldn't work without her.

If you can't tell I'm putting off getting to the news -- Pat died this week at the age of 93, and I'm incredibly sad about it. Just typing it now got my damn tear-ducts spinning again. 93's a fine full life and she had enough for ten of us, so there's nothing really to be sad about -- I had always hoped I'd see her in person just once but I don't think she'd been doing in-person things for awhile anyway. Still I always felt a deep kinship with Pat, being completely obsessed with her father's films from an early age and yet always feeling somehow outside of them, when I read that he'd named her Stage Fright character "Chubby Bannister" as a way to dissuade her from pursuing an acting career I knew she'd get it. 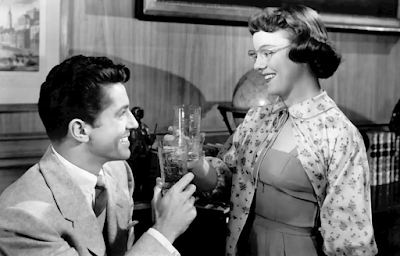 What I mean to say is she carried on his legacy religiously, but she also wrote a book about how integral her mother Alma was to his success, and I think more than anybody she got the tension between the magnificent product this man made, and the man behind the curtain who was, let's say, problematic. She plainly dealt with it herself. And I think one reason I was so immediately taken by Hitch's films was that the man was obsessed with Queerness, it's all over his filmography, not just in an obvious suspect like Rope or Psycho but everywhere, and nearly always villainized. But in a delighted way -- he adored his villains. He was fascinated by gayness -- Farley Granger has spoken about Hitch's bluntly prodding questions on the subject.

I'm getting away from the subject of Pat herself -- all I mean to say is that watching Hitch's films I often feel like he's calling me "Chubby Bannister" too. There's an agreed-upon gleeful sadism to the experience, where we've made a pact that we're in this because it's all so fun and perverse and stylish but in the end more often than not the Straight Pretty People will be the ones left standing. I imagine Pat had to come to terms with men like her father lionizing the Grace Kellys of the world, while she got handed the Chubby Bannisters, and so I loved her profoundly for standing in for that, whether it had anything to do with her actual experience or not. I would have loved to ask her about it, and I'm sad she's gone. And I'm sad she didn't act so much more. And I hope she had the most wonderful life. 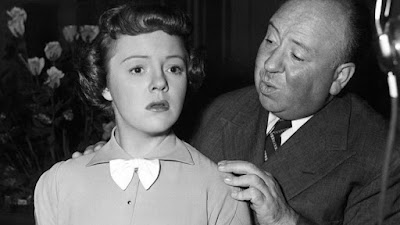 I thought of you and the banner instantly when I heard the news Jason! I do the same anytime I happen across Stage Fright and see her as Chubby Bannister as well!

It is a sad day even though 93 is a great run and she always seemed to have had a happy life so the sadness doesn't come in there, but more for the loss of that touchpoint. I felt very much the same way the other day when Jane Withers passed at 95.

Jane's circumstances were very much the same, she emerged from childhood stardom apparently unscathed thanks to good parents and a solid head on her shoulders and lived a long and for the most part contented life, though with perhaps a few more tragedies than most-her second husband perished in a plane crash and she lost one of her children to cancer at a young age. So it's not the ending but the slipping away of all the memories she evoked and had to share. She truly was one of the last performers who was active and old enough in the Hollywood of the 30's to recall what that period was and all the decades that followed.

Back to Pat Hitchcock, for me it's always Strangers on a Train that I thought of when I saw her. She's charming in Stage Fright but Strangers was the best role she had, I only have vague memories of her in Psycho but then I rarely watch that film. It is too bad she didn't act more since she had a sure comic touch. But she can't be faulted for choosing to concentrate on raising her family, especially since she was always so willing to share her memories of her parents at any time.