The Railroad Comes To Queens 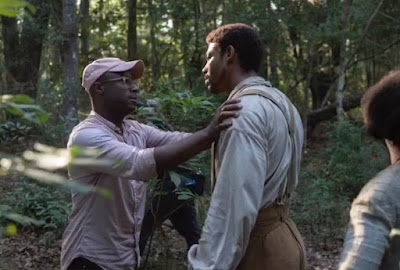 Have y'all watched Barry Jenkins' series The Underground Railroad on Amazon yet? I heartily recommend you do, it's exquisite and unforgettable -- it does of course have its share of devastating moments emotionally but you can see how hard Jenkins worked to keep it from being the kind of Misery Porn that slavery fiction can often slip into. It's honestly unmissable, so go watch it! (And bonus points for Aaron Pierre, pictured here.) And if you're in NYC or will be in NYC in the next several months (sidenote: I am not encouraging travel given there's still a pandemic) there's an exciting development regarding the show -- the Museum of the Moving Image has just announced an exhibition, running from this Friday until Halloween, that's all Underground Railroad. They'll also be screening some episodes, too. I've got the press release after the jump... 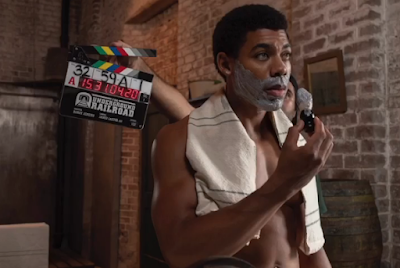 MUSEUM OF THE MOVING IMAGE PRESENTS BARRY JENKINS’S ‘THE GAZE’ AND DESIGN MATERIALS FROM AMAZON ORIGINAL LIMITED SERIES ‘THE UNDERGROUND RAILROAD’ IN GALLERY EXHIBIT
July 30–October 31, 2021
Astoria, New York, July 26, 2021 — Barry Jenkins’s extraordinary and acclaimed adaptation of Colson Whitehead's Pulitzer Prize–winning novel The Underground Railroad will be the focus of a gallery installation at Museum of the Moving Image beginning July 30. The installation will be anchored by Jenkins’s film The Gaze, a nearly hour-long assemblage of moving-image portraits of principal and background cast featured throughout the show’s ten episodes, and also include production and costume design material from the limited series. Installed within the Museum’s core exhibition Behind the Screen, An Act of Seeing: Barry's Jenkins's The Gaze will be on view through October 31, 2021.
In tandem with the installation, the Museum will also present a members-only screening of select episodes of The Underground Railroad in its grand Redstone Theater on Sunday, August 15. Learn more about becoming a MoMI member here.
In The Underground Railroad, Barry Jenkins uses a rigorous visual aesthetic approach in adapting Whitehead’s book, which follows the character Cora as she escapes from a Georgia plantation and makes the arduous journey to freedom. In tackling this project, Jenkins aimed to depict Black lives in the pre–Civil War south with dignity and authenticity. In The Gaze (2021, 52 mins.), his companion piece to The Underground Railroad, Jenkins further engages ideas about visibility, history, and power in the portraits of the series' background actors, inspired by the work of artist Kerry James Marshall and set to composer Nicholas Britell’s haunting score. Dressed in period-inspired costumes created by costume designer Caroline Eselin across the various environments that comprise the series’ occasionally fantastical yet achingly resonant mid-nineteenth-century settings, the actors gaze directly at the viewer, evincing a mix of vulnerability, defiance, and candor.
On what inspired him to make The Gaze, which he shot intermittently during production of The Underground Railroad, Jenkins noted, “Standing in the spaces our ancestors stood, we had the feeling of seeing them, truly seeing them and thus, we sought to capture and share that seeing with you.” The result is a remarkably intimate, meditative experience that invites viewers to reconsider the past as well as the present.
Along with the entirety of The Gaze, the installation will feature production and costume design material, allowing for an appreciation of how the visual world depicted in The Underground Railroad was developed. It includes a selection of concept art, created by production designer
Mark Friedberg working with artist Hugh Sicotte, which translates the script into digitally rendered images that vividly evoke the varied landscapes of the series. Mood boards compiled by Eselin show the wide range of historical and artistic imagery that influenced the overall look of the characters, and costume illustrations, made by artist Gloria Young Kim, demonstrate how those references were ultimately distilled into Eselin’s designs.
“While Barry Jenkins’s The Gaze is inextricably tied to The Underground Railroad, it is a compelling work of art in its own right,” said Barbara Miller, the Museum’s Deputy Director for Curatorial Affairs. “Its contemplative pace draws attention to the role of costume and production design in creating the emotional tone of the film. We are thrilled to present The Gaze alongside material that represents the exceptional work by production designer Mark Friedberg and costume designer Caroline Eselin.”