Bring On the Feast! 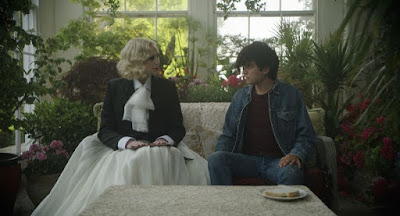 Oh happy happy day! I think I summoned this into being by finally watching Peter Strickland's 2019 gay-as-fuck short film GU04 (which you too could watch if you pick up this blu-ray set of Altered Innocence's gay short films) the other night! Strickland, who you should know as the deranged genius behind the modern classics and MNPP all-timer faves Berberian Sound Studio, The Duke of Burgundy, and In Fabric, has just announced his new movie! Not just announced it, but already finished filming it -- even better! It's called Flux Gourmet and it will star Sex Education and Hugo actor Asa Butterfield alongside former Strickland folks Gwendoline Christie and (bang the drum please) my beloved Fatma Mohamed...

... whose previous work with Strickland, most especially in In Fabric, ranks among my favorite performances of ever. (Read my piece on that right here.) As the title lets on Flux Gourmet will be set in the world of gastronomical pursuits, namely at as the press release states "an institute devoted to culinary and alimentary performance." But here, let me just let the press release do the talking, because g'bless all of this:

Synopsis: At an institute devoted to culinary and alimentary performance, a collective finds themselves embroiled in power struggles, artistic vendettas and gastrointestinal disorders.

Director Peter Strickland said, “Flux Gourmet came about through a personal frustration with how alimentary disorders or food allergies have been comically portrayed in some films, and without wanting to embark on a finger-wagging mission, I wanted to write something devoted to the disruptions of the stomach whilst attempting to maintain a degree of dignity to deeply private and embarrassing symptoms.”"