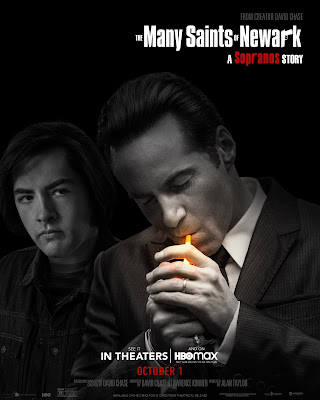 We've been waiting for this one for ages -- the poster and the trailer for the Sopranos prequel film called The Many Saints of Newark, which stars James Gandolfini's son Micheal as our teenaged Tony, who we will watch get pulled into the mafiaso allure of one Dickie Moltisanti... and it's not hard to understand why given they're represented by the alluring dimples of Alessandro Nivola (aka yesterday's birthday boy).

And I did mean those dimples, although...

... we do almost see the other ones in this trailer. And that is also alluring! Basically this movie looks to have everything. Vera Farmiga with a big nose! Ray Liotta cackling terrifyingly!  We don't see him in the trailer but Billy Magnussen supposedly! A flash of Leslie Odom Jr! Oh and Jon Bernthal and Corey Stoll spotted sitting in a car together!

Like I said: everything. In all seriousness even though I haven't talked about it much here on the site I'm a massive fan of The Sopranos and I think this looks ace, I cannot fuckin' wait. (And I am kind of hoping it ends with a flash-forward to 2007 and we see what happens after the screen cut to black in that diner via a CG Tony avatar who starts flipping around like CG Yoda, just to totally fuck with people -- I'd die of happiness.) The Many Saints of Newark is hitting both theaters and HBO Max on October 1st. Let's see if we can get the under-appreciated trifecta of Nivola / Stoll / Bernthal into the damn Oscar race...
Who? Jason Adams When? 12:41 PM
Labels: Alessandro Nivola, Billy Magnussen, Corey Stoll, Jon Bernthal, trailers

I stopped watching Sopranos after they bashed the stripper's head against a guardrail. Since this is on HBOMax, I'll probably watch it, maybe it'll make me finish the original show.

I know you’ve warmed up to Jon Bernthal but I never thought id ever see you excitingly add his name next to Oscar race in any of your posts. Haha.
I’m hoping Nivola can find greater success after this.

Simon -- you're not wrong; I will admit that I may have become blinded by my attraction for him, which has become real blinding. I didn't even think about the fact that I often find his performances lacking when I wrote this, haha. I just thought "God look at his hair. OSCAR!" I am not a reliable opinion-maker lol

Lol. I get it. It’s like me wanting a Tom Holland Oscar nom for that travesty that was Cherry. Hahaha

A movie? I thought it was going to be a series. Enh