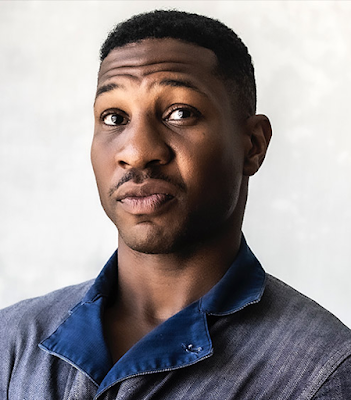 I still haven't seen the second Creed film -- I really didn't like the first Creed, which rubbed me exhausted with its lame-brained daddy issues -- but hiring my beloved Jonathan Majors to play the bad guy in a third film is exactly how you force me to sit down and watch a third film at least, and it sounds like that's what's happening (thx Mac). I'll follow Mr. Majors anyplace! I guess I should step back and say Majors will be playing Michael B. Jordan's boxing opponent, not the "bad guy" though, as I think the Creed films have been a little less jingoistic than the original Stallone ones were, but who knows. Who cares! Jonathan Majors in boxing trunks pounding on Michael B. Jordan in boxing trunks sounds like two hours of my money and time well spent. Ryan Coogler isn't directing the third film -- in the grand tradition of Stallone himself Jordan is stepping into the director's chair. That is, he's sitting into the chair, you don't really step into a chair, do you? What? Nevermind.

There's also some rumormongering about the second season of Lovecraft Country at that link above -- the original story about this Creed III news said that Majors was working this film's schedule around a return to Lovecraft, which would be, uhh, news in itself, given where his character in LC ended by its finale. Trying to not say the spoiler out loud even though even the simplest person could spot what I am not saying from outer space -- suffice to say I hope they do find a way for him to be on a second still-unannounced season since staring at him gave that series a full 3/4s of its oomph.
Who? Jason Adams When? 2:25 PM