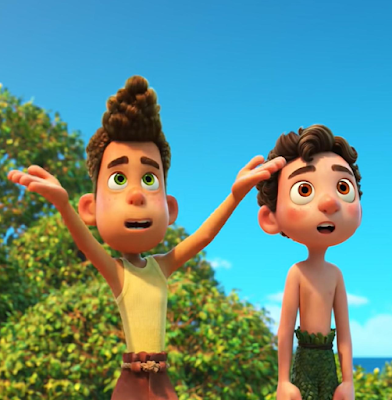 Just realized I hadn't linked a pair of reviews o' mine that went up on Friday when I was off -- firstly I wrote up my thoughts on Pixar's Luca at Pajiba, right here. Spoiler alert I thought it was the best Pixar film in ages, just like the headline there says, and I re-watched it over the weekend and only feel even more strongly about that. A lot of the complaints I've seen aimed at it is that it's too "simple" a story, as if simplicity is a detriment -- give me the clear clean lines of a story beautifully told and I'm there, baby. (And let's not even wade into the way this same complaint continually gets lobbed at queer films aka  "Nothing happens in Carol!"-itis.)

The other movie I wrote up I dug as well, although maybe not quite to Luca's level -- over at The film Experience are my thoughts on the horror-comedy Werewolves Within from Tribeca, which is a lot of fun... but really only that. Again -- making a movie that is simply and successfully a lot of fun is by no means an easy task! But Luca's simplicity and Werewolves' simplicity are operating on different levels, and Luca's emotional resonance is certainly going to stay with me a lot longer than the gut-chuckles of the latter. But if I need a good gut-chuckle I know where to look!
Who? Jason Adams When? 5:42 PM
Labels: Call Me By Your Name, horror, Pixar, reviews, Tribeca

I LOVED Luca and watched it a couple of times already.

Beautiful review by the way!