Let There Be Essie 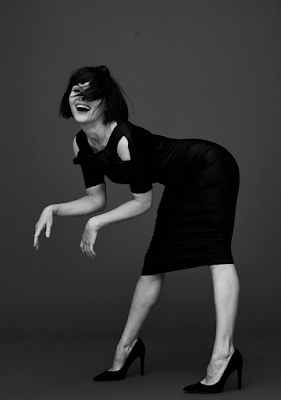 Ahh that photo of Essie Davis is making me swoon! Somebody needs to give her a glamour girl role, stat. I mean I love her playing, uhh, complicated mother figures (haha understatement) as much as the next Babadookian (I just made up that word but it stays), but look at her! I wanna see her do something camp -- get her in the Knives Out sequel as a "Madeline Kahn as Mrs White" type, for god's sake.

Anyway sorry I got distracted by that fabulosity -- listen I know Essie Davis has been a big deal on the Down Under for a very long time and she's probably done glamorous roles in her long career, and if she has I would love for one of you who've been there to witness to point me in the right direction. My experience with Essie has been all post-Babadook, which has gifted us with the complicated mother in Babyteeth, the complicated mother in True History of the Kelly Gang, the complicated Mother Superior in Lambs of God (man I loved that series -- seek it out if you can), and now... 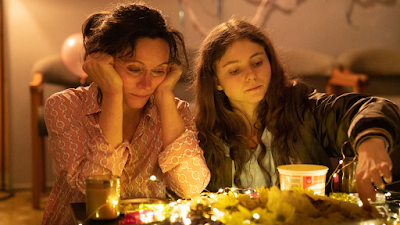 ... the complicated and then some mother in The Justice of Bunny King, which is playing Tribeca, and which I just wrote up for The Film Experience, click on over for my thoughts. And yes as seen above it co-stars the also terrific Thomasin McKenzie, who's also become one of my faves over the past couple of years. You'd be wise to seek this one out!
Who? Jason Adams When? 5:22 PM
Labels: reviews, Tribeca

Dude. Miss Fisher's Murder Mysteries. She is beyond fabulous -- she is the definition of glamour in that. If you haven't seen it, you really need to watch at least a few episodes.

Thanks, MJL -- I knew she had a show like that but I've never seen any of it; I hadn't even seen any pictures of her until just now when I googled it -- I had assumed it was like a frumpy lady detective thing but no, not that at all! I will totally watch some

You MUST fly right to your nearest available source and binge watch every single second of The Miss Fisher Mysteries!! Essie is brilliant in them but beyond that she is dressed to the teeth in one jaw dropping ensemble after another, all the height of 1920's fashion. Jewels, silks, turbans, gold...the lot. The mysteries are fun, her supporting cast is divine and best of all Miriam Margolyes plays her fussy and easily exasperated Aunt Prudence.

There are three seasons and a feature film "Miss Fisher and the Crypt of Tears". It's all utter joy.

Once you've worked your way through those you should catch up with the Mrs. Bradley Mysteries starring the incomparable Diana Rigg. Also set in the 1920's she plays a famous, and very liberal and liberated, criminologist who travels from place to place driven by her chauffer George, a delightful Neil Dudgeon, making droll observations along the way. Sadly there are only five episodes but she's golden in them.

I liked The Mrs Bradley Mysteries but I was a fan of the (very subversive) books and they're Margaret Rutherford as Miss Marple levels of different.

The Aussie Version Of The Slap! Which Also Features Gorgeous Daddy Alex Dimitriades Emerging From A Pool In Black Speedos And His Glistening Furry Chest.

Miss Fishers Mysteries is so good, you don't really notice that the mystery part is crapola. I do think the show mellowed out after the first season. She was so on the prowl for men in the beginning, and watching her conquesting hot men was really great. I was sad to see that get shifted away. But it's still good.

I agree that Miss Fisher's first series was the best of them, but as stated above she is a fabulous diva throughout and Miriam is great fun.

Also agree that the original Australian version of The Slap is a masterpiece and Essie is amazing.