Let Her Do the Cutting 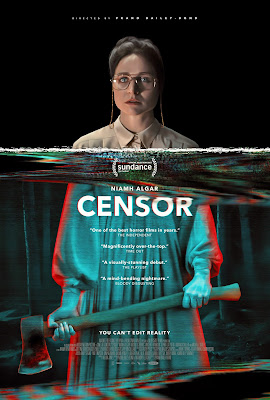 Not sure how this news slipped by me even while I kept looking for it but a real good horror movie I saw at Sundance back in January is coming out this Friday! (It also hits demand the week after.) It's called Censor and I reviewed it for Pajiba, read that here -- it stars Niamh Algar (who can also be seen in a small but memorable role in Guy Ritchie's most recent Jason Statham flick Wrath of Man) as a film censor in 1980s UK who works on trimming the bad bits from all of those infamous "Video Nasties" of the era. She watches the real degenerate stuff so we don't have to basically, and sure enough that shit starts to get to her and... well you can imagine. 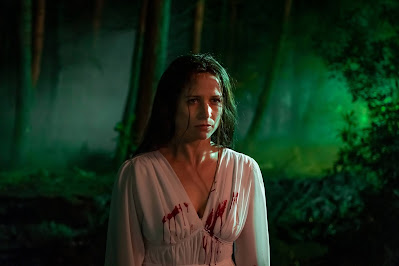 It goes dark! As I said in my review that idea for a horror movie is just one of those perfect ideas that were sitting there in the movie ether waiting to be plucked and turned real and writer-director Prano Bailey-Bond does a wonderful job plucking the heck outta it. Here's the trailer below, but as I usually say with horror movies maybe don't watch the trailer, maybe keep yourself nice and virginal for the dirty movie instead...
Who? Jason Adams When? 5:18 PM
Labels: horror, Jason Statham, Sundance, trailers