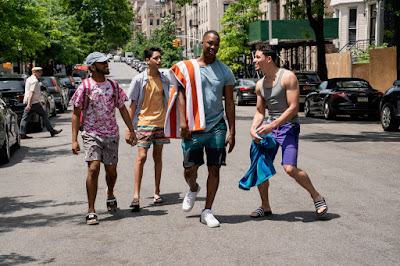 Every time I review a musical it seems important to me to add the disclaimer that I'm not much for musicals. But I think I've generally gotten better about that than I used to be? The list of musicals I can stomach has grown a little longer than it was a decade ago, anyway -- I do still gravitate more towards the ones that twist the form's trappings into new weird ways (your Hedwig, your Moulin Rogue, your Dancer in the Dark) than I do towards ones that embrace classicism (your Chicago or La La Land) but I've at least forced myself to sit down and watch more musicals in general, and so the list has through simple math grown a little longer.

The list is staying the same length today though because I sadly won't be adding In the Heights onto it any time soon. Not that I ever truly thought this movie was going to be made for me -- the only things grabbing me beforehand were the notable sex appeal of Anthony Ramos and the fact that the film is a love letter to my real-life New York neighborhood of Washington Heights. Well, sort of -- although In the Heights was indeed filmed all around my stomping grounds (a pivotal outdoor stairs scene happens less than a sixty second walk from my apartment door!) the ethnic make-up of my precise chunk of the neighborhood is actually mainly Jewish, a group that technically has more of a history with the place than Dominicans can claim, and I don't think I spied a single Jewish person in In the Heights? 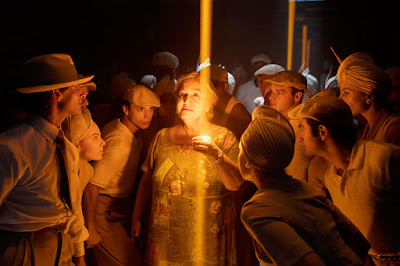 I'm not Jewish or Dominican so I am proposing no personal claim to The Heights, save the past decade so far that I've loved living there -- that sort of talk is besides the point, and anyway I've embraced my own villainous destiny as one of the white homosexuals who move into neighborhoods to signal the rent's about to go up (side-note: don't go looking for anything gay in this very straight movie either, save a couple of background tokens spied, where else, during a make-over scene).

But it is in itself fantastic and heartening to see a too-long sidelined minority culture take center stage, and it's winningly showcased by director Jon M. Chu and all of his actors. I think Chu's greatest ability might be with casting, and here, as with Crazy Rich Asians, it feels like you're getting in on the ground floor of a bunch of future movie star careers. Everybody's got charisma to spare. 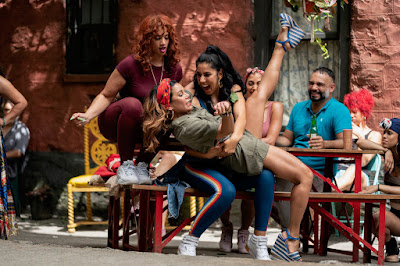 I just don't really know what it ends up being in service to. For one I found the songs to be wildly forgettable... but here's where my original disclaimer becomes important, because I really hate most Broadway scores. I notoriously can't stand Stephen Sondheim, after all! I mean I can appreciate, on the page, Sondheim's word-craft at the least, but once you tunelessly start talk-singing at me I just immediately check out, mentally-speaking. The music of In the Heights just drones in my ears, same same noise without even the saving grace of Sondheim's skillful wordplay.

The story, similarly, is a mash of tropes I've long tired of -- The Girl Who Wants Out Of This Place! Saintly Old Woman! The Boy Who Wants Out Of This Place! Too many characters with one defined quirk, their predictable stories running along long in-place tracks; I find it difficult to feel inspired when a person's Big Destiny just turns out to be just the tail-end of another cliche playing itself out to its well-trod end for the ten thousandth time. Is this all there is?

I know many people find comfort in the familiar, and not-so-weirdly many of those people seem to be Musical fans. I'm really not trying to be condescending when I say that is nice for them! And I suppose a lot of people will find it enough, the Summer Spectacle, the Big Screen, and I wish them well with even a tinge of jealousy. I'm looking forward to losing myself in the Movie Experience as soon as I can. In the Heights just isn't the one for me.

I do, although it is quantifiably awful

Can't Stop the Music is a lot of fun. I like it because Nancy Walker thought she was making a Mickey Rooney/Judy Garland musical, and it's a lot of fun. Anyway, I am going to In the Heights this weekend, because it's a fundraiser for the Gay Men's Chorus. I know very little about it, so it will be pretty fresh. Also, I'm watching a lot of musicals lately because I'm directing one this fall and haven't done one in 25 years. Also, we need this movie now, don't you think? PC or not.

I'm gonna ignore the Sondheim comment, b/c I just...can't.
I saw Heights on Broadway, and loved it, and the music. I'm excited to see it.
A friend made me listen to Hamilton on a road trip to Boston, and all I could think was, I've heard this all before in Heights, so I didn't even get around to watching my free SAG download (I was to busy falling asleep to Nomadland and Minari. I think I would have liked both more in a theatre, after months in Quar.)

By the way, In the Heights is terrific. I wasn't expecting to like it as much as I did. It's the best movie musical I've seen in a long time and the cinematography and choreography are outstanding as is the production.

Spielberg's remake of West Side Story is going to have to be awfully good to come close to the brilliance of this movie!

I wanted to love it but i just liked it.
The story is one cliche after the other and the songs are indeed forgettable. I also spotted many similarities with the Hamilton score.
However the cast was charming, the cinematography and there was a very nice dancing scene (stairway/roof).
I will pretend i never heard your Sondheim comment and i will agree with all your comments about In the Heights.