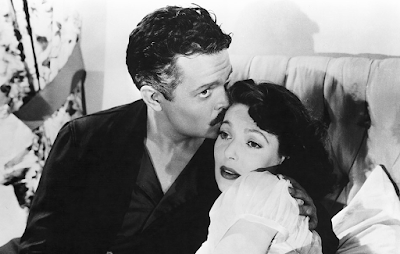 Mary: Oh Charles, I can't imagine you're
advocating a Carthaginian peace.
Professor Charles Rankin: Well, as a historian,
I must remind you that the world hasn't had much
trouble from Carthage in the past 2000 years.

Writer-director-actor and Martian Invader Orson Welles was born on this day in 1915. When I had my sick day last week I saw The Stranger for the first time thanks to TCM and wow, I dug it? I was skeptical going in because I never, in theory, am all that excited about watching an Orson Welles film, which is weird because I have liked most of them! Citizen Kane, The Lady From Shanghai, Touch of Evil, his role in The Muppet Movie -- these are unassailable things. But I'm never running to watch an Orson Welles picture for some reason. And The Stranger has another demerit in the form of its leading lady Loretta Young, who's usually a big no-thank-you from me. And yet I really dug the small town shadowy paranoia of this movie -- very Shadow of a Doubt. Any fans? 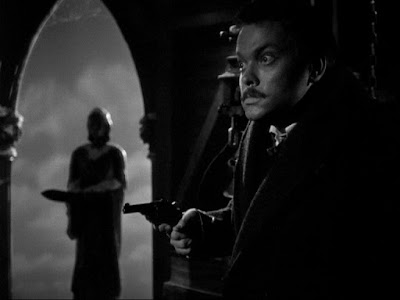 It has a great atmosphere and both Welles and Edward G. Robinson are very effective. As I said before Loretta Young is very resistible for me, particularly in this phase of her career where any semblance of freshness she had in her youth was replaced by a mechanicalism that irks me to no end. However she is less so in this probably because Welles forced her to interact and not pose.

It has been quite a while so the next time they show it I should revisit it. It's never hard for me to spend some time with Eddie G.