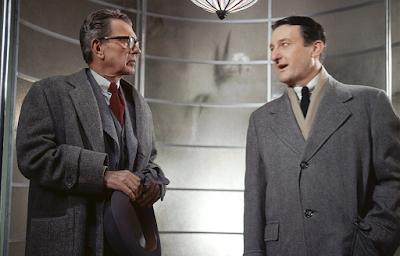 Dr. Vesalius: Human error won't stop him.
Inspector Trout: Why? What do you mean?
Dr. Vesalius: He's had years to hide, to plot this
damnable thing. He's compelling himself to follow
exactly the classic death pattern of the G'tach.
It's the psychic force that holds that man together,
this maniacal precision. If we could just throw it off,
interrupt the cycle, then he might be stopped
by his own inflexible standards.

A happy 50 to one of my favorite Vincent Price movies -- no really it is, it made my Top 10 list earlier this year! -- which was released on this day in 1971. It actually made my Top 5 Films of 1971 list as well, so you really know this one's special-says-me. (Here is a fun "Ways Not To Die" post from this elaborately death-riddled movie.) I mean listen to this factoid off its trivia page on IMDb:

"Originally advertised in the US with the tag line, "Love Means Never Having to Say You're Ugly," a parody of a famous line from Love Story, which had been released the previous year; however, that was replaced after the first week, as opening box office was disappointing and it turned out audiences had no idea what sort of film this was supposed to be. A new advertising campaign made it clear it was a horror film, and afterwards it became a box-office hit."

As you can see that wonderful tagline remains on the film's original poster, though -- wish I had one of those on my wall! Anyway as stated above this movie was a hit for Price and eventually summoned forth an inferior but fun-enough sequel the next year called Dr. Phibes Rises Again -- well I say it's "fun enough" but I can literally never remember a whit what happens in the second one. But Vincent Price is there so it's worth watching, aka The Goldenst Rule of them all.

I saw Dr Phibes when it came out in 1971 at summer matinee when I was 10 years old. I thought then that it was a great horror movie. And it gave me the proper nightmares.
But I did not appreciate the 1920 's set design, music and style [a wind up orchestra!]. There must have been a lot of money spent on the production. The second movie was just ok. Theater of Blood which made your VP list is a an interesting contrast and it also has Diana Rigg. / Paul Mac

A true gem and a must own for any Vincent Price fan. I adore this film and the sequel as well.