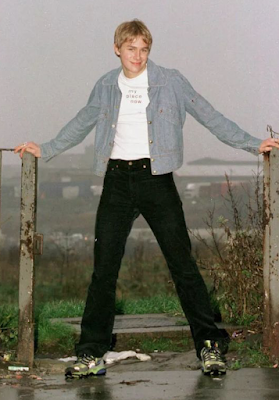 The headline at TV Line for this news really drew me in -- "Queer as Folk Reboot: Peacock Orders 'Reimagining' of OG British Series" -- with happy pictures inside my head of Charlie Hunnam and Aidan Gillen returning to the hot-n-heavy roles where I long ago fell in love with them... only to quick sucker-punch me with the details. It doesn't sound like it will really have anything to do with the original series, besides Russell T. Davies being a producer; it will be more akin to the U.S. version (which I couldn't ever get into), just another group of gay people being gay and doing gay, as gays gay, gay do gay, gay.

"Described as a “vibrant reimagining” of Russell T. Davies’ seminal British series, the new Queer as Folk will center on a diverse group of friends in New Orleans whose lives are transformed in the aftermath of a tragedy. Stephen Dunn (Little America) serves as creator, writer and exec producer. He will also direct several episodes."

Well as long as it's "vibrant" that's what matters! In all seriousness I do have hopes for this -- maybe not "high" just yet but if it's closer in spirit to the original than it is to the tacky-ass poorly-acted Showtime version that'll be a big step in the right. And with Davies fresh off the totally solid tearjerker series It's a Sin he's proven he's got plenty of juice left. We're in desperate need of Queer content these days. (Justice for Looking!) And hey if my boys Nathan, Stuart, and Vince show up anywhere well all bets are off. Talk about vibrant!

Whenever I read an American "re-imagining" I think of all the crap the writers went through in the series Episodes. (Which was excellent.)

the showtime thing was indeed just tacky, with awful dialogue and a conviction that gay people live their lives obsessed with being gay.