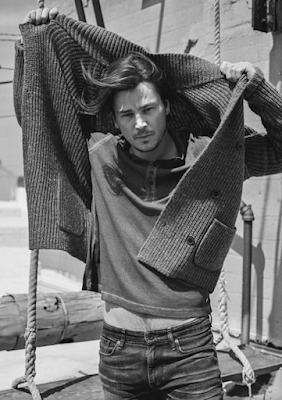 While the wild success of Raoul Peck's masterful miniseries about white supremacy Exterminate All the Brutes (which I wrote about here) was in no way dependent upon Josh Hartnett, it's still a pretty goddamned good credit for him to have on his resume, and so I'm happy to see him announcing something new hot on its heels -- he's leading another miniseries, this one with presumably a little less lofty goals, an adaptation of the Robert Harris novel The Fear Index about a computer genius whose world is thrown into disarray after an AI he created that exploits people's fears in relation to financial markets. Anybody read the book? David Caffrey, whose directed lots of The Alienist and Peaky Blinders, is directing. I'm always wary when gorgeous actors take on the role of geniuses, but this sounds pulpy enough that it will hopefully not be distracting. You never want to venture into "Tara Reid holding a clipboard" territory...
Who? Jason Adams When? 11:43 AM
Labels: gratuitous, Josh Hartnett