I haven't done a link round-up like this for ages! They always end up taking way more energy than they ought to -- I mean the whole idea is to present news in bite-sized portions, but I can never keep myself from rambling. You know me. But also I don't know if, due to the pandemic, we've had a period quite so thick with movie news as  the last several days has been -- aww, nature is healing! (Wear a mask.) Let's get to it. 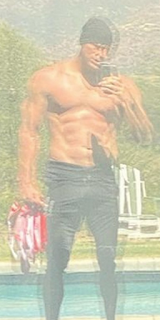 -- Two Big Ds -- The actor who calls himself Brad Pitt has just joined the cast of Lost City of D, which already has Sandra Bullock and Channing Tatum attached. I thought I'd posted about this movie when it was first announced but the archives say no -- anyway it sounds like a broad re-do of Romancing the Stone; Bullock is playing a romance novelist, Tatum is playing the Fabio-type model for her book covers, and the two of them get dragged into a romance and also a kidnapping adventure in the jungle while on one of her book tours. DH says Pitt's role is a cameo, one he did in exchange for Sandy doing a cameo in his forthcoming action-thriller Bullet Train.

--- Take A Bite Outta -- Even though the news is only a couple of weeks old I'd already forgotten that Evan Peters was going to play Jeffrey Dahmer in an upcoming Ryan-Murphy-produced miniseries, so it's good to have this interview with him in Variety remind me. (thx Mac) He briefly talks about prepping for the part, alongside mostly speaking about his Kate Winslet detective series Mare of Easttown, which is out this weekend. I don't know where that series came from, it really snuck up on me. I only heard about it for the first time like a week ago and now it's here!

--- Leftover Man -- If that Justin Theroux shirtless cover-shoot for Esquire magazine that I shared yesterday wasn't enough for your Theroux-thirst then you can head over to Interview Magazine, where he's also chatted up alongside some fine beard photography -- he's got that Mosquito Coast TV program hitting on Apple soon (already?) and that's what all of the press is for. That said this chat is a good reminder that he is a naturally very funny individual, hotness aside.

--- Real Thick And Juicy -- I am sure you've all been happily following along with all the talk of Chris Meloni's ass ever since he (and it) popped back up on SVU a couple of weeks ago, but if you missed it Meloni has been milking his ass for all it's worth (god, phrasing) -- EW rounded up some of the fun, bouncy chatter. Jump on it and bounce, baby! (thx Mac)

--- Bad Fish -- I've become sort of a stealth fan of the Danish actor Pilou Asbæk in a few things over the past several years -- Lucy, Ghost in the Shell (in which he had a Lot of Look, seen to the left), Overlord, and of course his welcomed snarky turn on Game of Thrones last few seasons, which really needed the snark, so I'm happy to hear he's just been cast in the Aquaman sequel in an unspecified role. It will probably be a villain, since he's European. This is known as the Mads Mikkelsen rule.

--- And Finally I was happy to read yesterday that the actor Fabien Frankel had landed a big role in the Dorne-centered Game of Thrones spin-off prequel called House of the Dragon; as seen below Frankel really grabbed my attention opposite Tahar Rahim in the Netflix series The Serpent, which I've mentioned here on the site oh once or twenty times.

pilou asbæk is a snack what a gorgeous man!

Agreed on pilou asbaek! Seems that he gets his knob out at full mast in a film called sex drugs and taxation. Looks wacky
https://men.aznude.com/view/celeb/p/pilouasbaek.html

Gasp! Hollywood greenlit a romance where the woman is 16 years older than her male love interest? Amazing! Now hopefully it's actually good so I'll want to see it. The two of them could be great together.

thanks for the links adam! cheers.