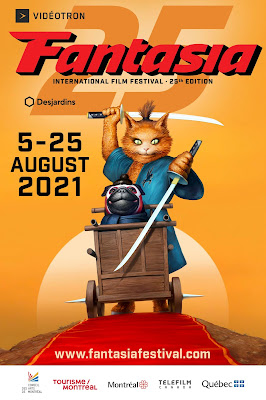 In the sort of grim convergence we've become accustomed to over the past twelve-plus months I had just finished reading an article about how bad Canada's COVID numbers are when I immediately then saw an email announcing that the annual, beautiful Fantasia Film Festival in Montreal will be all virtual again this year, running from August 5th through 25th. I suppose virtual makes sense then! Not that I've ever personally gone to Fantasia in person -- all of my coverage over the past few years has been of the virtual sort, even pre plague-times. And the fest is staying Canada-centric, meaning I don't think any of our U.S. readers can access the screening platform. But I have Canada readers -- hey you two! -- and I always consider my Fantasia coverage a preview of coming attractions -- they always get quality small genre movies way before anybody else and I can tell y'all what to be on the look-out for. 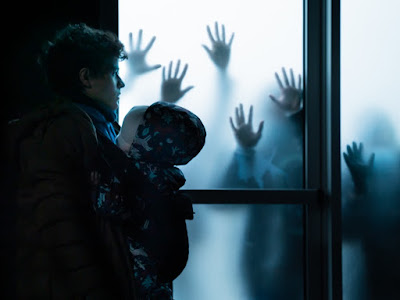 Speaking of -- besides their fun new art-work seen up at the top of this post the fest has also announced their opening night movie. It's a zombie comedy called Brain Freeze and it sounds like it's also got plague-times on its mind...

"Julien Knafo’s BRAIN FREEZE. First pitched at Frontières, the festival’s world-renowned international co-production market, the film is a smart and stylish zombie comedy that slyly comments on social concerns both domestic and universal, telling the tale of an environmental disaster that leads to a fast-spreading virus ravaging a wealthy gated community off the island of Montreal. BRAIN FREEZE joins the ranks of recently-released cinema that holds an eerie mirror up to our collective experience even though scripted and shot pre-pandemic. While production on the winter-set chiller was abruptly halted four days before completion following Quebec’s lockdown, shooting was miraculously able to wrap the following summer. "

Who? Jason Adams When? 11:24 AM
Labels: Fantasia Fest, horror

❤️... and I never use those. They did just announce today that people between 18 and 40 in my area can book their vacs next week! So yay!