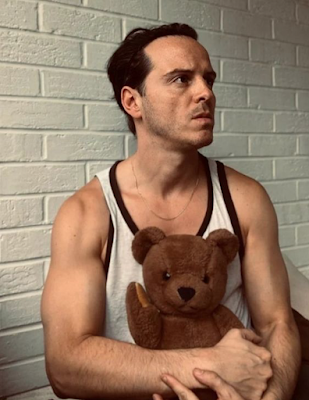 My first thought upon reading the news that Andrew Scott will (probably) be playing British PM Tony Blair in the final season of The Crown, which begins filming soon, was definitely, "Ooh Andrew Scott." My second thought though was definitely, "Oh I'm not gonna bother posting that, because I'll have to admit for like the 50th time that I still haven't watched a single second of The Crown, and who needs that headache?" But then, my third and most important thought came when I stumbled upon the above photograph of Andrew Scott about an hour after reading that Crown news, when I thought, "Well I guess I am doing a post, because I'll be damned if I'm not sharing that picture of Andrew Scott wearing a tank-top and snuggling a goddamn teddy bear." So there. You're welcome. Now somebody tell me if there were rumors about Tony Blair and Prince Charles (Josh O'Connor) having a torrid sexual affair in the 1990s, and by "tell me" I mean, "write your best filthiest slash-fic in the comments, please."
Who? Jason Adams When? 4:36 PM

Well, we know what Andrew Scott has been doing in the Quar.