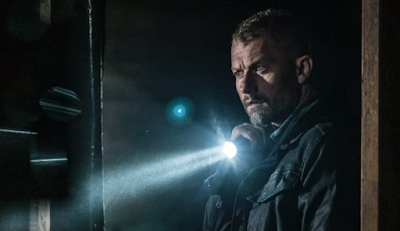 I made unexpected friends with two surprising new horror flicks this weekend, which turned out to be far more than their front-facing parts -- below are some quick thoughts, but if you wanna avoid spoilers (not that I go that deep) just know I recommend both of these! Check 'em out!

The Empty Man -- I honestly thought this was just another piece of anonymous studio-junk a la The Bye-Bye Dude or The Slender Fella so I ignored its existence for awhile, even with the always-welcome James Badge Dale getting a rare leading man role, and that's egg on my stupid face -- this flick's actually much much more interesting than that. I should've know when it got a lousy Cinemascore grade that it's interesting! Cinemascore always gets horror movies wrong.

At two-hours-and-twenty-minutes s it too long? It is maybe too long. But do I have a clue what I'd cut? I do not! Certainly not the ace opening sequence set in the Himalayas that seems totally disconnected from the rest of the movie for awhile (it is not), since that mini-movie on its own is worth the price of admission. And the middle might meander a little but by the arrival at the film's final destination that meandering feels of purpose, of worth. Not to mention the million little scares that are plunked down here and there askance it. (Oh and James Badge Dale is in long-underwear a lot! Good proper movie stuff!)

The film openly toys with the expectations I placed on its going in, flirting with being one of those generic movies -- blandly stereotyped teenagers speak a Candyman-like riddle on a bridge, summoning up something unspeakable! But talk about some wild swings and wilder swerves -- The Empty Man is seriously richer, smarter, and so much fucking stranger than all that. Just take the ride. Stick with it. It'll stick with you back, I promise.

Son -- This movie made me jump, jump, and jump some more. Another Cult Oddity -- and no big jump required from me telling you the horror sub-genre of the Q-moment would be all about cult-thinking -- Son has a great shock set for its first jump-scare, a terrific jab that just got me totally and completely, and then just kept 'em coming.

Like The Lodge last year Son tells the story of a young woman who escapes her abusive cult-leader father and deprograms herself in order to try and lead a normal life, only to have that past come roaring back to life, peeking through her windows. She keeps telling the cops (led by a sensitive-eyed Emile Hirsch) that she's not crazy, that what she's seeing is really happening, and the film believes her so much that we become skeptical of the film itself -- it's a weird little mental infection of discombobulation, which made sense one I realized this was from Ivan Kavanaugh, the director of the fantastic 2014 flick The Canal; Kavanaugh wants to make us feel crazy, and he half succeeds.

Son's maybe not quite as unassailable as The Canal, a film which still makes me shudder whenever I remember certain visions from it, but this film is better-shot, with its neon-blanched Americana, emptied of soul but rife with ugly poisonous color and rot. There too are visions here I'll find myself squirming at the memory of, and repressing them for the sake of my longterm self.

I'm so glad The Empty Man is getting more love. It's such an amazing movie and JBD is a great leading man.