Til Undeath Do Us Part 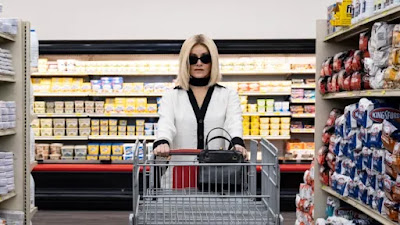 I've talked on this before but I grew up, much to my eventual dismay and oh then some, deeply enmeshed in the Pentecostal Church of my small upstate New York cow town. My grandmother was my Sunday School teacher when I was little and and as I grew older, up through my teens, all the few friends I had were from that world -- we went roller-skating to Christian Rock on Thursday nights and pretended to speak in tongues on Sunday, and in between everybody was secretly talking about or secretly actually fucking. Well except me of course -- this was a No Gays zone -- although a couple of those impossibly pious girls sure tried.

The biggest drama of all came in the early-90s when our young-ish hip-ish pastor, only a couple of years new in town and the position, banged one of the parishioners and broke up his own marriage -- I was good friends with his kids of course (did I mention that this was a very small town) and it was le scandal, lemme tell ya. They all moved away not long after, taking my friends and a piece of my indoctrination  with them; looking back on it now it's hard not to see that (along with my suddenly assertive thing for boys) as one of the first bricks sledgehammered out from the walls I'd built around myself. The sunlight of imperfect people. Wow.

Even though they're mere Episcopalians -- Pentecostals definitely think Episcopalians are going to Hell -- the lead characters of Travis Stevens' incredibly fun new horror film Jakob's Wife (following the terrific Girl on the Third Floor a couple of years back), a pastor and his wife played by genre-legends Larry Fessenden and Barbara Crampton, flooded my sense-places with memories of that time in my own teenage years. That broken family's abstract brokenness and its effect on me, telescoped in -- what kind of a crazy pressure is it to sit in those pews and play the part of this pure, saintly thing year after year after year? It must be exhausting.

Barbara Crampton, playing Anne Fedder wife of Jakob (Fessenden), sure makes it clear it's so -- this is a tour de force of sighs and scowls; Anne is climbing the walls. Well not quite, at least not yet -- though it's strained, her and Fessenden lay a sweet baseline between the two; they speak the same language but Anne really wants to speak some new tongues. And so when into town rolls an old beau named Tom Low, played by Robert Rusler with just enough of that "hot friend from Nightmare on Elm Street 2" energy left buried under his middle-aged skin, together they make it easy to see why Anne would let Tom sidle up and plant her a wet one on a night-time stroll through one of their old haunts. 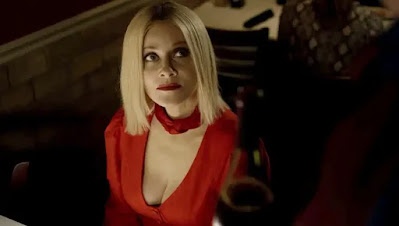 Unfortunately for everybody this particular haunt is now literally haunted -- somebody's dropped several boxes of foreign soil and plague rats there under its rafters, and before you can say "Oh No'sferatu you didn" Anne's got two big pulsating bite-holes in her throat and Tom Low's been torn in two, more like ten. Although Anne later scoffs at the moralistic idea -- Anne, bless her, scoffs at a lot of those -- that this supernatural turn is punishment for her peccadilloes, the one-plus-one-equals-vampire series of events does make that kinda hard to argue with; thankfully Stevens (along with co-writers Kathy Charles and Mark Steensland) have other complications in store for the plotting of Anne's lil' swivel toward the dark-side.

Namely by the complications they entangle Anne's knotty and contradictory desires with. A lesser film would've gone for the cheap cheer moment of Anne knocking Jakob's irritating block off and then strutting towards the exit, but Jakob's Wife is smart enough to see that's not what Anne actually wants. And while her big vamp turn might have its perks -- there's a massively enjoyable sequence at film's center where we watch Crampton go all in on with her new powers -- it's still something that was forced upon her without her consent, and Jakob's Wife to its great benefit keeps its eye on that ball too.

The film is at its thrilling best when it's navigating how this formerly-stable couple faces their bloody new reality, all upended -- after the initial set-up the film clearly isn't very interested in the world outside of these two and their desolate crater of a town, and so, pretty quickly, every other character begins to feel extraneous. Yet nevertheless side-characters do seem to proliferate in its midsection, making the last half feel a little bloated -- I mean don't get me wrong, I loved the Fright Night allusions and the gore-hound in me wouldn't want to lose a single gallon of arterial spray, but I'm not really sure how all those characters end up tying back in to what matters most, the squishy black heart of long-term hate-love affection at its center. More Phantom Thread (Phantom Dread?) and less of the weirdly middle-aged seeming hooligans straight out of a later Friday the 13th might do the trick.

But when Jakob's Wife does laser in on that central relationship -- and I'm happy to report it mostly does! -- it's bliss. Like another SXSW film Swan Song did with Udo Kier, Jakob's Wife if a gift to genre-fans of a wholly underappreciated but familiar presence, giving especially Barbara Crampton and fans of Barbara Crampton a big bloody feast to sink our fangs into. She's funny, she's fierce, she's fucking Barbara Crampton horror queen, and what a damn pleasure it was to sit with a movie that too knows, tastes, and howls her excellence on up to the moon for all to hear. Howl it back, my happy sinning friends! Barbara fucking Crampton!

"The sunlight of imperfect people."