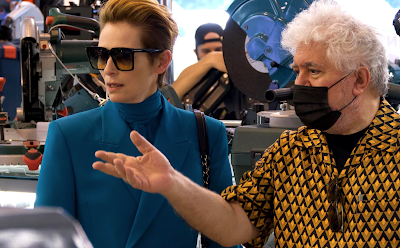 “The first film of Pedro’s I saw was Women on the Verge of a Nervous Breakdown. I remember seeing Women on the Verge of a Nervous Breakdown and feeling this enormous sense of relief. Here was a filmmaker making films about Europe and about people and a milieu that I recognised entirely—and at the same time, a contemporary artist whose reference to the cultural landscape of cinema makes him heir to so many great directors through film history, especially those great masters who have focused their narratives and their atmosphere on the lives and passions of women,” recalls Swinton. “Pedro was putting onto a global screen a sensibility and a vernacular which was close to the underground world I was living in with Derek Jarman in London in the ’80s and early ’90s. He was always our Spanish cousin, very dear and greatly cherished as a fellow traveller with brilliant moves.”

I had a tough time choosing a favorite quote from this interview with both director Pedro Almodóvar and actress Tilda Swinton on their fabulous short-film collaboration The Human Voice (which is screening in some art cinemas right this second!), there were several I was weighing, but you kinda can't beat Tilda talking her first Almodóvar and casually dropping Derek Jarman's name to boot. If you haven't seen The Human Voice yet do, ASAP -- it's the perfect dream of what you think it could be and I can't believe it missed an Oscar nomination this morning; malarkey, I say! I reviewed it for NYFF right here.

In related news I watched Derek Jarman's 1978 punk-nuttery Jubilee for the first time last night -- it's streaming on the Criterion Channel -- and holy hell I was ashamed I hadn't seen that one before. I keep telling myself I need to just sit down and binge every Jarman movie I haven't seen, but that feels kind of like cheating -- they'd be all gone if I did that! No more Jarman to discover! I want them to come naturally to me, of their own accord, when we find the moment mutually right.

I couldn't get into Jubilee. Caravaggio and St. Sebastienne are both so artsy and wonderful.

Where can I watch his short film?

Anon -- I'm surprised to see that they've only released it in actual theaters, and not virtually, but I assume Pedro had a hand in that (he seems the type to demand some screens first) -- I know it opens at Film Forum here in NYC this upcoming weekend, but supposedly it's also playing at theaters in Miami, Chicago, San Francisco and Los Angeles too -- I don't have a list of theaters though. They say it's rolling out to smaller cities after this, though