One Potato, Two Potato, Me Potato, You 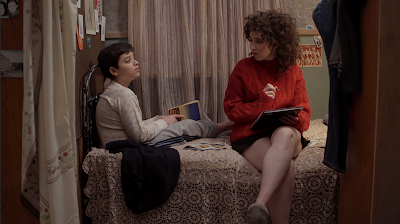 They say that reality is stranger than fiction, but a good storyteller knows how to make reality even stranger still, and it turns out that Wes Hurley, the director of Potato Dreams of America, is a damned good storyteller. Potato Dreams tells Hurley's own autobiographical tale of growing up gay in the Soviet Union of the 1980s, tracing his unlikely path from watching bootleg American movies through static to eventually -- a thorough eventually -- making them himself. And it tells its often sad and scary story through big sparkly bursts of creative movie-magic -- what a gem this little Potato turns out to be.

Following an introductory quote from Quentin Crisp, because naturally, we first meet our little Potato (his mother's nickname for him) when he is indeed little, real little -- so little he's able to magically transform the scene of his mother being beaten by his father in front of him into a spectacular song-and-dance routine (but in black-and-white, because nobody in Vladivostok has a color TV yet) just by framing it in between his fingers. But this isn't just some Iron Curtain Walter Mitty, of gritty realism butting heads with fantastical escapes -- in Hurley's capable hands this Potato World, even in its seedier moments, always feels extra special.

The USSR of his youth is as hyper-stylized as late Fassbinder, half-naked Russian soldiers dance-fighting in silhouette against the horizon, stagey rubble scenery and prison-scene pietàs. This is the delectable stuff of a Jarman movie, purposefully pretend, memory made arch and unreal. Because how else would Potato, cinema-lover, remember anything? Time's turned my own remembrances of childhood poverty and abuse into their own operatic movements, with shifting scenery and stage directions -- it only feels right to go big or go home, and Hurley gets that. 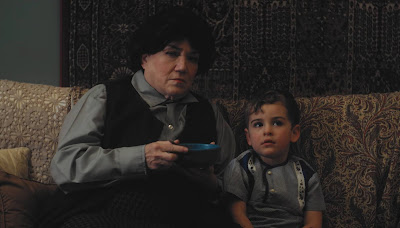 There are second and third act surprises I wouldn't want to ruin but Potato Dreams of America sees the young boy become a young man, switching actors and settings but never losing its sparkling sense of humor and community and wild creativity -- people keep surprising Potato, and the world keeps revealing itself to be weirder and, weirdly, kinder; as we move through the 90s and Potato learns of Gregg Araki and other gay people (in the Biblical sense) his story, so singular, really does begin to feel intrinsic to all our own. America might be a physical place but Hurley reminds us it's even more an idea, a boundless one, built on every immigrant imagination and dream.

Potato Dreams of America is screening at SXSW right now!

This one is on my list to look for. Thanks!

I haven't read a review in decades that made me want to see a movie more than this one does. I will be on the lookout for this film.