A happy 43rd birthday to South Korean actor Jung-woo Ha, who played the sexy but awful Count in Park Chan-wook's glorious lesbian romance caper The Handmaiden. I know the Count is awful but Ha looks so good in those period costumes, you guys. I can't help myself. At least I'm not lusting after the Uncle, for god's sake. Anyway...

... I haven't seen any of his movies since The Handmaiden came out in 2016 but pre-2016 movies of his I have seen and recommend: The Yellow Sea and The Chaser, both wildly compelling action flicks from The Wailing director Hong-jin Na (also see The Wailing, a wild horror flick, while you're at it). See more of Jung-woo Ha at this link! 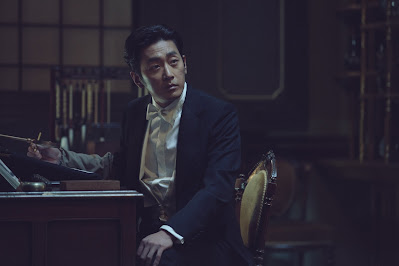