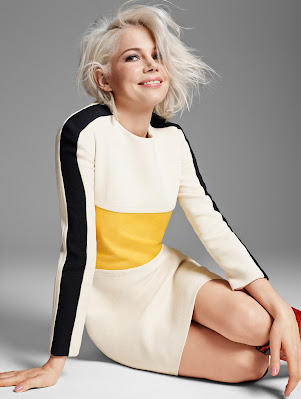 Big day, huge day, for us homosexuals -- not only is Pedro Almodovar reuniting with his perfect muse Penelope Cruz for a new movie in March, but the director Todd Haynes has just announced he's next making a bio-pic of the singer Peggy Lee that will star Michelle Williams! I'll admit that I don't know a ton about Lee besides being familiar with some of her music -- somebody in the comments tell me about her life, what's interesting enough about it for a bio-pic, that'll be much more fun than me going to read her Wikipedia page! I'm basically just excited because Todd Haynes + Michelle Williams! Making a period film! That's plenty, people. 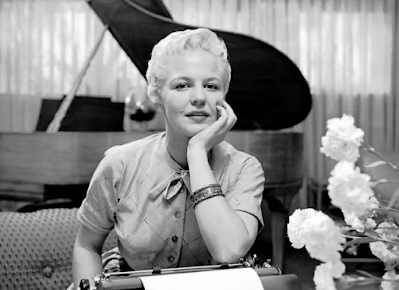 I know a bit about Peggy Lee because my late ex knew so much about her. I swiped some of this from Wikipedia, but Peggy Lee was an astounding woman! Bette Midler recorded an album of music from her songbook, and Michelle Williams, who has proven herself with her roles as Marilyn Monroe and especially Gwen Verdon, will be marvelous in the role!! Peggy Lee is one of the most important and influential musicians ever: Born Norma Deloris Egstrom in Jamestown, North Dakota, Peggy career lasted over 70 years. Her family home in Wimbledon, ND is now a museum honoring her career. A Fargo radio personality discovered her, changed her name to Peggy Lee and put her own the air. After a short stint in California, she needed a tonsillectomy, so she went home. She toured with a couple of bands and performed in Fargo, perfecting her style. In Chicago she started working with Benny Goodman.
She married in 1943, and while raising her daughter, continued with music, writing songs including the title song for the film Manana. She was signed to Capitol Records, appearing on radio. In the 1950s, she appeared in Pete Kelly’s Blues, earning an Oscar nomination. She also voiced Darling, Peg and the cats Si and Am as well as writing much of the score for Lady and the Tramp. While preparing a Broadway show about her life, she fell ill, suffering from diabetes and died of a heart attack at the age of 81 in 2002.
Her awards and tributes are overwhelming. Peggy Lee was one of the great stars of 20th Century Music.

From a NYT review of a biography of Peggy Lee:
"Between high-paying gigs in New York, Las Vegas and around the world, Lee took to her king-size bed in one luxurious California house after another, and people came to her — so she could treat most of them like servants. She was, by all accounts, an alcoholic, a prescription-drug addict, a heavy smoker and a binge eater frequently out of touch with reality. Between marriages (three of the four were impulsively entered into and predictably brief), she had affairs with her own musicians, a television producer, Frank Sinatra and Quincy Jones, and never got over Robert Preston. Lee blamed everyone but herself for her misery, which seems to be why her self-pitying Broadway solo show, “Peg,” closed three days after opening night"

I only knew her from the Lady and the Tramp. The tramp song is still fun, but it’s sad that the Siamese Cat song is completely offensive now. I used to really love that song but can’t listen to it any more it’s so painful. Kind of in par with Mickey Rooney’s gawd awful role in Breakfast at Tiffany’s. Peggy Lee looked so tragic in her later years. I hope TH’s biopic gives us some understanding of what caused her to end up like that. And I hope it’s a return to the higher quality films he’s mostly known for. The last two films of his were good, but he had reached such a peak with Carol. Safe is still my favorite of his films.

Peggy was kind of a mess, which should make for a great story. Given the 1950s mileau and focus on music stardom, Haynes should knock this out of the park. And Williams is great casting.

Clearly none of the commenters know her music. I have almost all her LPs. Many are masterworks. Part of her appeal was her live performances - considered somewhat risqué in the 1940s/1950s. Her last masterwork was Mink Jazz (1963) - like almost everyone else of the 1930s-to late '60s turned to recording the crap of that time and beyond. I stopped listening to her after about mid-'60s. She had continuous hits from 1942-late 60's. Also made the mistake of allowing Capitol to falsely release her 1959 Miami DJ convention LP as a live recording when it's not (the actual live recording was deemed not releasable due to tech issues - this happened to a couple of other Capitol LPs at the time like Sinatra's Come Fly With Me - they released the stereo version in 1961 and if you listen to it the Nelson Riddle signature brass coloring seems to become garbled). When it was discovered it created negative publicity - mostly directed at Capitol suits. Bios of her tend to focus on her perceived public persona - nothing too personal. Suspect that if her daughter were still alive this would not be green-lit. And the commenter saying she developed her style in ND is way way off - she did that while working at the Doll House in Palm Springs in the 1940's. A friend refers to her as a minimalist singer - I disagree. I think of her style as understated and yet dynamic and could be said to be more powerful that way.