The Power of HaShem Compels You 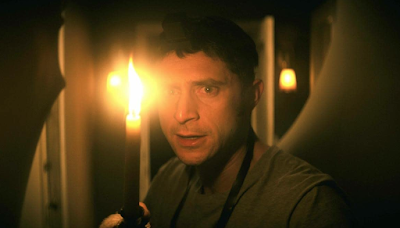 You can't run away from your past. Your past is always there, over your shoulder, like the monster in a scary movie -- spin your head around and maybe you'll just see something out of the corner of your eye, or maybe there will be a wall of fangs straight on snapping back. Luck of the draw, and not knowing which it'll be is what makes us all, each and every one, haunted people.

And like most of the smart and hyper-efficient horror films before it Keith Thomas' shudder-inducing The Vigil knows all of the above, and melts it down into the metaphor of terrifying movie stuff. He's aided by some good old-fashioned folklore, here of the Jewish variety, as the tale he spins centers in on a lapsed Orthodox fella by the name of Yakov (Dave Davis) who, in dire need of fast cash, steps back for a single night into the religious fold he'd abandoned due to a test of faith, to sit shomer over a recently deceased.

All that means is he needs to watch over the body. Just some old man. Big pay day. The body's barely cold by the time he gets there. No big whoop. Overnight. Dead body. In the dark. With a dead body. What could possibly go wrong, right? Right? Wrong. What could possibly go wrong is more right. Thomas, proving a more-than-fine mastery of twitchy atmosphere and timing, throws every trick in the unholy book at us, with shuddering shadows and stomping feet in all the places they shouldn't be; old ladies making dire pronouncements and skeletons snapping; toenails contort. Old videotapes and candles flicker, quiver, and shake. The Vigil's a haunted house tale of the mind, where every creak comes from an un-sturdy sanity, splintering under foot. The weight of living's a lot, day to day -- some of us can barely stand it. Just wait til it's tested and see.

And that's day to day -- try century to century sometime. Like any folk-horror worth its weight in gelt The Vigil stretches back towards the past, just like the face of its twisted turnip-fingered monster, opening with a flashback reminiscent of the nightmare scene that opens the Coen Bros 2009 masterpiece A Serious Man  (and the connection's taken even further with an exquisitely placed Fred Melamed voice cameo, for the Coen nerds in the back). Dybbuks abound. The past, as the saying goes, is never really past -- it's a'nibblin' on your broom, baby.

No I definitely meant shomer -- https://en.wikipedia.org/wiki/Shomer -- he's not sitting shiva, that's for the family and loved ones I think? He's a paid guardian entrusted with the body, until the rituals can be performed on the body. Shiva comes later, I think? Admittedly I am not Jewish! But my understanding is there is a difference?

There is a difference. The Shomer Sakar application would have to do with property protection, not a person (or ex-person), according to my understanding of Halacha. Does Jewish law say a corpse is property? I don't know. Admittedly I also don't really know the plot of the film so maybe there is some other interpretation here. As a Jew my reaction is it would seem strange to pay someone to sit with a body, or to have anyone who isn't a family member sort of hang around. But maybe someone knows more than me - always a risk when one is of Hebrew origin :-).

The film uses the term "shomer" repeatedly, and it's a plot point that there is no family left, so I feel pretty okay about my usage. But I think the things you're highlighting are actually meaningful disconnects that a Jewish person will get from the film that I clearly missed! The treatment of a body as an object sounds purposeful here, for sure.

Ok then I will see the film.

Watched is last night. WOW! Everything in this movie worked...the story, the atmosphere, the sound mixing, the music, lighting, sets, acting...all of it. It gave me chills but then soon after i had tears streaming down my face. I look forward to more from this writer/director.