His Name is Luca

I should stop tweeting out my best thoughts before I write up my posts -- John Waters says that's why he doesn't have a Twitter account, cuz he's not giving away his jokes for free -- but earlier when the trailer for Pixar's new cartoon Luca appeared I tweeted...

Ya know my CMYBN-loving ass made plenty of jokes about a Pixar movie being called LUCA being set in a beautiful Italian village but they seem to be coming right at me bro with that gay gay gay gay gay trailer (yes I cried a little) pic.twitter.com/PrNTEb5hM4

... and that's where I'll be coming at as I share Luca's trailer with you today. It's inescapable, watching this thing, how gay it is. (Up to and including the fact that Jack Dylan Grazer, star of Luca Guadagnino's series We Are Who We Are, voices the big-haired kid.) I say that knowing there's a housewife in Idaho clutching her Liberace records (second Liberace reference of the day, it's about to start raining rhinestones up in here) who watches this trailer and sees not a whit of queerness, but me? I watch this? I hear Sufjan playing in my head.

Granted Sufjan is literally always playing in my head, but you know what I mean. Two young boys discover they share the same secret and together must hide it away from the world, while becoming incredibly close in the process... I'm not projecting anything sexual onto child entertainment here either, but gay kids exist! I know from firsthand experience! We develop crushes on other boys, just like what happens with straight kids, and those ones get OOOOOHs and AWWWWWWWWs in the church parking lots across this country. All we're asking for is it to be admitted, by culture, that we exist. 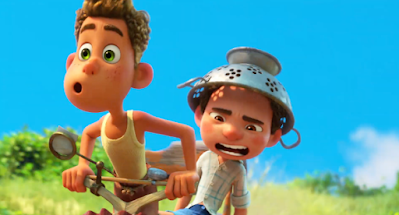 I mean then we'll have other requests, but ya gotta start somewhere. Anyway this movie's never going to come out (heh) and say anything explicitly, it is a Disney product after all. (Bless Laika for Mitch in ParaNorman.) But the metaphors are clear as Sufjan's voice on a summer day, and hopefully they'll be brave enough to not you know stick that female friend seen in the trailer awkwardly into the middle of what is plainly going on. Fingers crossed. Watch the trailer and y'all tell me your thoughts in the comments please!
Who? Jason Adams When? 10:38 AM

Looks very charming. I'm projecting, but who hasn't crushed hard on a straight friend only to have ones heart broken? I feel like the taller of the two boys will end up with the girl in the end.

...imagine being something and feeling afraid to reveal who you really are? 😂 ❤️️