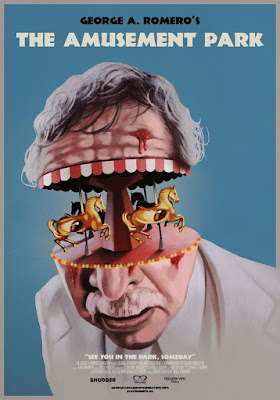 Super news today as the "lost film" of George Romero, 1973's The Amusement Park, is going to premiere on Shudder later this summer! (And how amazing is that poster they came up with?) Romero shot this for the Lutheran Society who wanted to highlight society's disregard for the elderly, but they were so horrified by the horror film Romero that delivered them they never released the footage. Until a couple of years ago, when a print was discovered and got cleaned up to the max -- they screened it at MoMA last January and who was there? I was there! Of course I was there. And down below you can see some video I took of Romero's widow talking about the movie. It's a curious and fascinating little document for sure, and any Romero fan will want to watch it -- you can see the genius-to-be already forming his obsessions.