When We Were Who We Were, Back Then 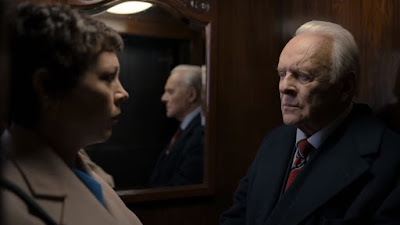 Time slips, not like water, but like molecules -- it doesn't drop, it dissipates. We're running along on the desert sands of the hourglass in outer space, gravity-less and free floating from moment to moment to moment.  A rock slide around Orion. Think of those rooms at the end of 2001 -- estate rooms, finely wainscoted, enclosing eternity in a series of airless boxes stretching nigh on forever. Life, birth, death, erasure, beginning and end -- where the painting doesn't hang, the discolored spot, is where we stand.

Or maybe not that either. The film does what Christopher Nolan keeps trying and failing at, which is to ever so gingerly reach into our minds and tweak out the corners and meaty pieces of our perceptions, before we even notice what's being done. Time loses all meaning, and then finds more meaning amongst its meaninglessness. We care about Anthony and his daughter(s) fast -- they are funny, kind, human. When they cry we die a little. What better gateway drug into an emotional maelstrom than actual honest-to-goodness caring? Imagine it.

The Father finds plot in its miniature mystery -- a Masterpiece Theater episode of Murder She Wrote meets The Twilight Zone, where our expectations of expectation are vehemently held against us. As soon as we think we've got it sorted out it tosses a wrench or two in, the sets drop their walls, resettle themselves into unsettling configurations. As a person who's wandered my own apartment furious at my keys or my phone which has obviously grown little legs in order to spite me this movie gets it, the rage of age; of the short-cuts we've mentally habituated to over time turning right against us. You walk one hallway enough times, enough years, you stop noticing the hallway, but one day all of a sudden that feels like time travel.

Here I was born, and here I died -- the circle of life might meet back up with itself but only inside our own heads. We're all little gordian knots snowing down from the heavens, self-contained in the prisons of our frayed and frazzled consciousnesses -- panopticons by way of Decepticons; unholy structures burned down to their skeletons staring balefully back. We're running towards the answers to the puzzles of our pillar selves as the roads in front of us and behind us turn to ash. The only place is the place where our feet meet the current moment, but if you drill down to small enough turns out nothing actually meets anything -- there's always some space, insignificant as eternity, in between. 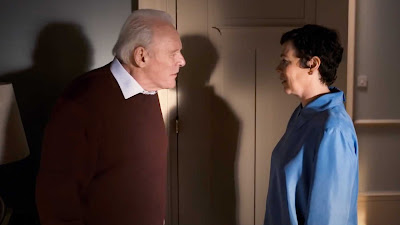 I'm excited to see the film version of The Father. I saw the play on Broadway starring Frank Langella, and it is the single finest performance I have seen in over 50 years of theatergoing! He was extraordinary and won a well-deserved Tony for his magnificent performance! It's a beautiful piece of writing as well.

Langella's such a terrific actor, I wish I'd seen that. And I'd be fascinated to see how they worked the effect of the space subtly changing on a stage -- I'm sure it was simple, because the way they manage it in the movie is simple, but it would still require some stage magic I think? You have to notice it and not notice it, I mean

what a beautiful review

[i may have mentioned this before but... you're very good]

This looks wonderful and your review is beautifully written. As someone who watched my own father slip away to Alzheimer's I tend to avoid these kinds of movies since they tend to be pretty painful to watch. But I think I need to see this one