Make Your Way At Atlantis 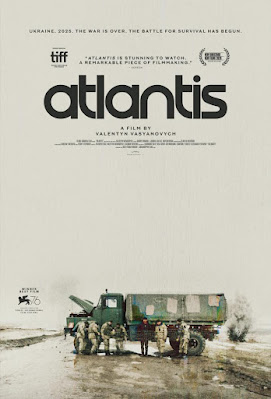 There is an absolutely fabulous new movie out today that I was really hoping I'd get around to reviewing but that plainly ain't gonna happen at this point, not with Sundance bearing down on me in a week and my attentions elsewhere -- it doesn't help that I saw this weeks ago for the "New Directors New Films" series at MoMA and FLC; I should've written my thoughts up then. The movie is called Atlantis and it's from Ukrainian director Valentyn Vasyanovych -- it follows a traumatized soldier around the war-torn landscape but at a distance; like 75% of the shots (as you'll see in the trailer down below) are wide so you can take in the world and man alive is it something. (This is a film I really want the chance to see on a huge screen when such things become possible once more.) And it's one that requires patience I suppose -- it's not an easy film -- but I found it masterful. Vasyanovych teases out humor, beauty, and unspeakable horror from his long static shots -- there's one sequence in particular that ranks among the most disturbing I've ever seen. It's not to be missed by any serious film-lover! Here's the trailer:
Atlantis is playing on the virtual streaming service for the Metrograph theater here in NYC today, and it'll apparently be rolling out to local cinemas after that. Support your local theater! And see this beautiful unforgettable movie.

Sundance is a go this year? Gonna be a ton of restrictions, good luck a enjoy

It's virtual! I'll be watching everything from the safety of my couch :)

Have you ever been there?

If you did go do you have to pay your own plane ticket and lodging?

I am sure the folks who write for the big outlets like the New York Times do not have to but lil' ol' me would def have to, yes