The Midnight Sky in 275 Words 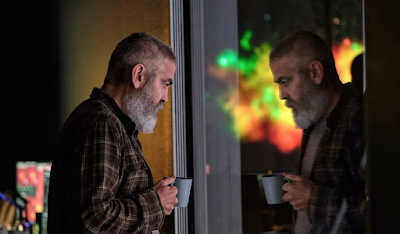 Never have the heavens felt heavier than they do in George Clooney's The Midnight Sky -- perhaps that's because instead of their usual light and air they're suddenly stuffed with space debris, muddled exposition, exhausting musical compositions, bland characters, weird interior design, Felicity Jones' single facial expression, the eternal strain for some sort of emotional or philosophical resonance or significance, a splash of cosmos twinkle, and David Oyelowo's bicep-accentuating future shirts, maybe not in that order. No wonder Clooney's main character can hardly lift his head. It's heavy, man.

Set about 25 years in the future immediately following a vague apocalypse Clooney's character finds himself stationed at a stark frozen outpost -- my favorite thing in the film is the station's name, a Carpenter-ian flourish worth a smirk -- all on his lonesome. Except, hark Newt, he's not -- there's suddenly a mute little girl standing there. Cue the strings, and the strings, and the goddamned strings -- when Alexandre Desplat's soundtrack started plinking as the adorable little girl rolled some microwaved peas across the table I, for my sanity, had to check the hell out.

There are a couple of well-done set-pieces of the action sort -- what starts out as a rip-off of Gravity ends instead on a nicely underplayed note of tragedy, and there are scattered glimpses of cosmic brilliance in the film's expensively shot sheen. But my god I never cared. I never cared about the astronaut characters because they're never flesh-and-blood characters, and I never cared about the people on the ground because their scenes are so molasses-handed, thick with pushy melodrama, I skittered backwards in my seat as if shoved by a magnetic force. 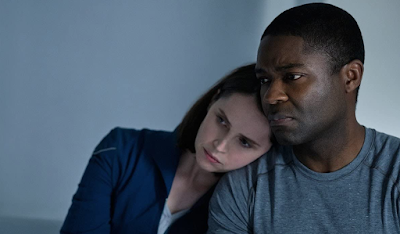 The bit about Felicity Jones' single facial expression cracked me up. I've seen her in several projects now, and I think I've only ever seen her emote when she's asked to portray angst.