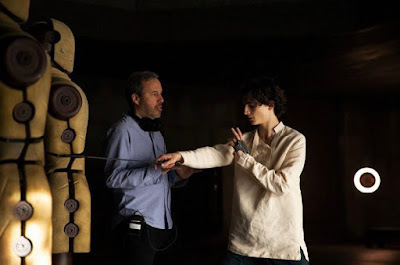 "Streaming can produce great content, but not movies of Dune’s scope and scale. Warner Bros. Pictures’ decision means ‘Dune’ won’t have the chance to perform financially in order to be viable and piracy will ultimately triumph. Warner Bros. might just have killed the ‘Dune’ franchise. This one is for the fans. AT&T’s John Stankey said that the streaming horse left the barn. In truth, the horse left the barn for the slaughterhouse.”

-- Somehow I missed this yesterday but in Variety Dune director Denis Villenueve wrote a scathing screed about Warner Brothers' decision to dump their entire 2021 slate, his sci-fi epic included, onto HBO Max next year; if you missed it too the entire thing's right here. This is business-end of the movie-business stuff which I'm never super into talking about, but I suppose "the medium's future" is somewhat important, haha. And Villenueve says things that were less doom-and-gloom than the above quote -- he does a much better job of not coming off like Christopher Nolan, who pushed his terrible movie out into theaters smack-dab in the middle of a pandemic, for instance, by saying he was totally cool with the film being delayed until next fall. And the quote below is one filled with hope, and something I also truly believe:

“Once the pandemic is over, theaters will be filled again with film lovers.
That is my strong belief. Not because the movie industry needs it, but because we humans need cinema, as a collective experience.” pic.twitter.com/s6HZ1vN8rS
— Matt Neglia (@NextBestPicture) December 11, 2020