We Can Be Jarheads Just For One Day 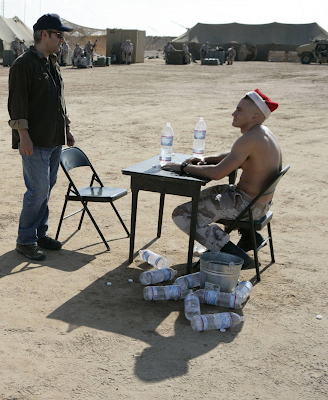 These are, very plainly, things that I have posted a gazillion point five times in the past fifteen years. But here on the 15th anniversary of Sam Mendes' 2005 film Jarhead -- which is a film that I have spent perhaps an entire year's worth of time thinking about in that fifteen years thanks to Jake Gyllenhaal's whole... thing... he had going on -- and on a day when I can't muster much else to say, it seems worthwhile to link you on over to the Tumblr, where I shared a lovely gallery of set photos of Jake a couple years back.

Was it a couple of years ago? Was it a couple of weeks ago? I have no concept of time right now. Whatever the time, they're there now dammit! Have you watched Jarhead recently? I have not! I have no thoughts at this moment on Jarhead as an actual film. But as a delivery system for Prime Jake In (And Out!) Of Uniform Jarhead remains unsurpassed!

I remembered this movie being so homoerotic, which is why I watched it so many times. That's when my crush on Jake Gyllenhaal grew more.

I mean, that's the movie where we actually got a (blurry, steamy, possibly not, but definitely saw it) frontal of Jake!

So, the film gets a million stars from me.