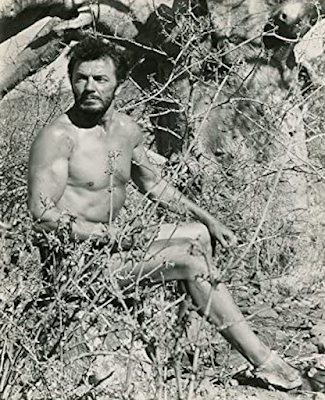 Per usual on Friday I told y'all I had some stuff to share over the weekend and then the weekend came and I fell off the face of the planet -- I get home, I lay on my floor, there's no doing. No doing nothing! Anyway only half of the two things I had to share went up, so let's share that thing now! Do you recognize the actor seen above? That would be... 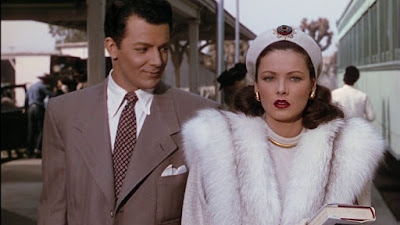 ... Cornel Wilde, the actor who played the schmuck who gets obliviated by Gene Tierney in the 1945 technicolor-noir masterpiece Leave Her To Heaven, which I wrote up some thoughts about over at The Film Experience on Saturday for Tierney's Centennial. I've written a'plenty about this movie over the years -- it's one of my faves -- but this might be my favorite thing I've written about it so please do go check it out. I had fun.

In case you're curious these nudie shots of Mr. Wilde are from the 1965 flick The Naked Prey, making this is 20 full years after Wilde cut a sharp figure in his high-waisted trousers in Heaven -- he kept it going on, he did. (Anybody seen The Naked Prey? It's been released on Criterion so it must be worth seeing right?) I've admitted before that I think Wilde's kind of blown off the screen by Tierney in Heaven but the more I watch that movie the more I notice how broad his shoulders are, how tiny his waist, and I stop caring so much about his performance...

Who? Jason Adams When? 11:50 AM
Labels: Anatomy IN a Scene, birthdays, gratuitous, horror

Is it possible there's something wrong with the site? You've mentioned twice this morning posting things on Friday/over the weekend and I don't see anything since the Riz Ahmed post Thursday afternoon.

I've mentioned twice that I was going to post things over the weekend, but then didn't -- because I am lazzzzzzy. That's the only thing wrong with this site, MJL ;)

I haven’t seen The Naked Prey but LHTH is worth everyone’s time. See it if you haven’t.