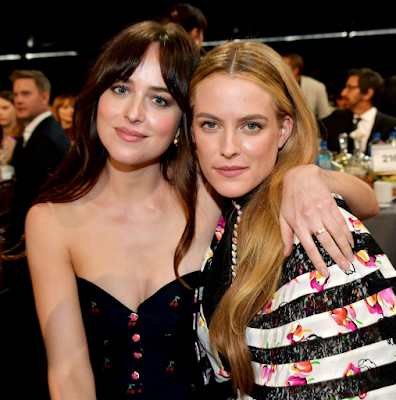 Let's end the day with some gloriously, deliriously happy-making news -- two of my favorite young actors, and the two who have most proven as of late that nepotism (as long as we're not talking politics) doesn't absolutely always have to be a bad word, have gone and made a project for themselves to star in together! First off I actually had no idea that Dakota Johnson and Riley Keough even knew each other -- when I went to find a photograph for this news I expected to have to photoshop something up but there they were, as seen above, chumming it up like my new favorite couple -- apparently they've been best friends since they were 15 and Dakota was Riley's bridesmaid at her 2015 wedding (a pertinent aside: Kristen Stewart's apparently a close pal too). I love, love, love it.

Anyway! Cross-eyed star-fucking aside our new fave BFFs Riley & Dakota are going to star together in a limited series called Cult Following, based on a memoir by Bexy Cameron that's set to be released in July of next year, which tells the story of... well I'm feeling lazy, I'll let Deadline explain it for us:

"Based on the book written by Cameron, the story follows her as she recounts her upbringing in the notorious cult Children of God. After emancipating herself at the age of 16 and building a life away from the cult, as an adult Cameron (Johnson) embarks on a road trip with a close friend (Keough) to investigate and document contemporary cults existing in America today. Two young women set out on the ‘adventure’ of a lifetime and Cameron’s emphatic, raw and at times incredibly funny experience on the road runs parallel to her examining and processing the psychology and trauma of her own childhood being raised in a cult. It’s a journey of meltdowns, meth cooks, monks, Jesus freaks, soap-making Armageddonists, surveillance vans, ex-Apple employees and finally, Cameron’s confrontation of her parents and ultimately herself."

Did anyone see her in 'The Lodge'? She was quite good, creepy little flick.