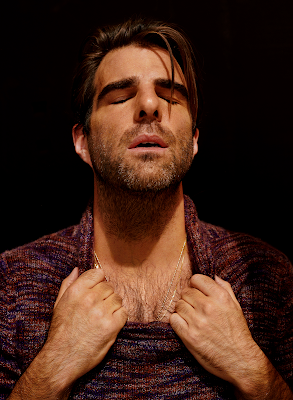 I went into Netflix's Boys in the Band re-do expecting Zachary Quinto to be my least favorite thing about it, because what I saw in the trailer seemed to be simply an impression of what Leonard Frey was doing in the original movie. But a couple weeks out it's pretty clear to me now that his funny, strange performance is the only thing that's really going to stick with me (the only thing that's not naked Matt Bomer anyway) -- it's a fucking bizarre piece of theater, what he's doing, but it at least holds the screen. (Here's my review of the whole ordeal, if you missed it.) 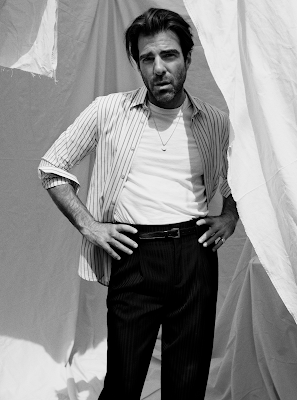 Anyway not to stir the shit-pot of my snide sentiment towards Boys a tenth time in as many breaths -- there's just a new shoot of Quinto in Interview Magazine, a couple of which you see here and the rest which I just posted on the Tumblr. His chat in the magazine is with fellow Ryan Murphy stalwart slash gay person Sarah Paulson, so it's probably fun! (I have not read it yet.) They are fun people, Harge. 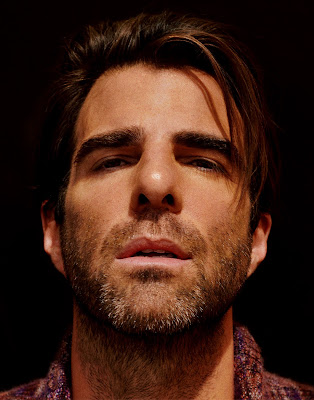 Personally I think he gave the worst performance in the movie. He was doing a terrible Leonard Frey impersonation whereas the other men made the parts their own. I think Robin de Jesus was the MVP. BIG improvement over the original Emory.

In everything I've seen him in, including off-screen moments captured in photographs or interviews, he invariably seems off-puttingly creepy and slimy.

Zachary did a commendable job but was outshined. Matt only had his ass to offer, which was the only thing I liked about his role.

Yeah, I find Quinto completely odious. I wanted to watch the movie *only* for Emory, whom I love, but I couldn't make it more than 10 minutes into Boys in the Band because that meant I would have to listen to/look at Jim Parsons for two hours and he gives me the CREEPS.