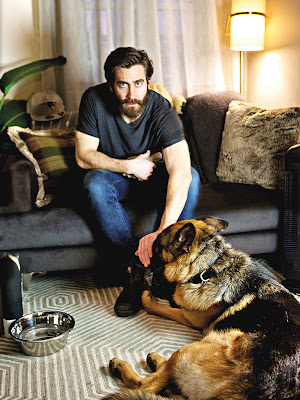 There's a new book of photography coming out in November called Time to Act: An Intimate Photographic Portrait of Actors Backstage from photographer Simon Annand, who photographed a bunch of actors in London's West End, including, most notably, our boy Jake with his pup Atticus seen above. I haven't seen Atticus in so long, I missed him! Anyway I assume this was for Sunday in the Park With George, given the beard? Anyway also featured in the book are portraits of Cate Blanchett, Orlando Bloom (fingers crossed he's naked), Anthony Hopkins, and Judi Dench among others, and the foreward is written by Blanchett. And there's a terrific shot of Phoebe Waller-Bridge on the cover that it took my like three minutes to figure out who the hell it was. (click image to embiggen)
Who? Jason Adams When? 11:46 AM

Aaawwww I actually just found out that Atticus passed circa 2015, he was such a charmer! <3