Invasion of the Ginger Snatchers 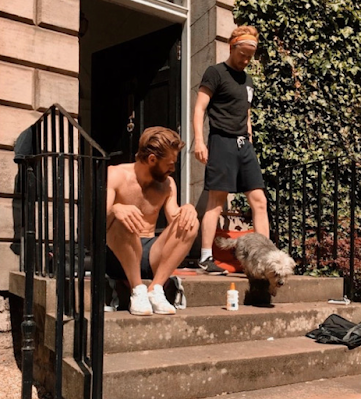 First things first it seems important to share the above photo of former Dunkirk twink and current Saoirse squeeze Jack Lowden hanging out with his bearded ballet-dancing brother Calum -- you know. Important. Jack's Instagram has been fun over quarantine -- I advocate following him for your recommended daily dosage of ginger goodness. Sometimes doubled! You can't OD on Ginger!

Moving on! Jack is the co-star of a very fine horror movie that's coming out very soon! And yes that is The Great And Honorable Fiona Shaw you see in the above gif alongside him. The movie is called Kindred and IFC is dropping it on November 6th -- it stars Tamara Lawrance (a British actress seen in several TV series over there; she's also featured in one of Steve McQueen's upcoming "Small Axe" series of films) as a young woman in love with our boy Edward Holcroft...

... which marks any character automatically as "smart." Anyway they go to the country to visit his mother (Shaw) and... things get scary. I have indeed already seen this and will review it closer to its release date but I recommend you put Kindred in your calendars, is what I am saying for now. November 6th. That being said this trailer gives away too much, and you maybe shouldn't watch it. I enjoyed knowing nothing going in. But you're an adult and can make your own damn decisions, so here. Choose wisely...
Who? Jason Adams When? 12:01 PM
Labels: Edward Holcroft, gratuitous, horror, Jack Lowden, Saoirse Ronan, Steve McQueen, trailers

It took me 30 seconds to realize this was not going to be a film adaptation of the Octavia Butler novel. All the same, this looks fantastic!