Race With (a Side of) the Devil

It's surely not impossible for white writers to talk about race, since we clearly (emphasis on clear, har har) participate in the system of it, benefitting off and exploiting it. But I'll admit I always feel like a charlatan when I have to go there -- the burden cannot only be put on people of color, but it's important for us to just shut the fuck up and listen too. It's not that I don't wrestle with the subject! One is just sure one will sound like an asshole, at some point, even if one intends better. Finding that middle ground can be thorny, which is the point -- we need those thorns to prick us the right way. And so I find myself this week, this day, sitting awkwardly on my thoughts about three films tackling the subject, trying to make some smart sense of them.

Steve McQueen's Lovers Rock is opening the New York Film Festival (more on that later) at the same time that two horror films, each dealing with race, are dropping -- today a movie called Spiral is hitting Shudder, and tomorrow the long-delayed (thanks to COVID) and bigger-budgeted Antebellum, starring Janelle Monae and Jena Malone, is opening on VOD. I'm not going anywhere near the latter because several black writers I admire (see Angelica Jade Bastién's review at Vulture) have eviscerated it in ways it has coming, and I defer to them. If the film ever found anything to say I might've tried but it is tepid and reticent towards a subject you can be neither, and doesn't earn that effort. (Thankfully my girl Jena Malone escapes unscathed though.)

As for Spiral, well it's not entirely successful either, its reach far exceeds its grasp, but it does do some interesting things that I feel compelled enough to go there. I suppose it helps that queerness is also on hand, to ease me into it -- I feel right at home talking gays! Spiral stars Jeffrey Bowyer-Chapman and Ari Cohen as Malik and Aaron, a gay couple who've moved to the suburbs from the big city with their daughter Kayla (Jennifer Laporte) -- Aaron is her biological father while Malik, the far younger partner, seems more like a friend. The age difference between the two men feels pronounced, and even as outsiders in a new place age and race makes Malik feel like an outsider among outsiders -- the spiral of the title feels an apt metaphor there, with ever smaller concentric circles of belonging, isolation.

The "spiral" actually comes into play as a symbol of I believe Satanic hullaballoo -- without getting to into the specific meat of the neighborhood shenanigans you can see what's coming early on: these smiling suburbanites have their secrets, as every too friendly neighbor does post-Rosemary's Baby. I probably couldn't get too deep into the meat of the threat anyway because I wasn't really ever sure what it was, exactly -- the film overplays its hand when it comes to muddying up the what is what of it; Malik is swallowed up with flashbacks of a gay bashing from his youth, and the filmmakers take more care in making his sanity suspect than they do in sorting out the outer, existential threats. It becomes a bit of confusion for confusion's sake.

Still setting the film in the 1990s makes the film more interesting than it might have been otherwise -- that era, suffused with plague as it was, was particular. As a felt-trapped gay resident of a small-town my own understanding of gayness, like all of those not in the closet around me, finally seeped into external consciousness in this period, but only because of death and disease. AIDS was unavoidable at that point, and that was how I first came to see My People: as victims. The decade was bookended by Matthew Shepherd of course, which only furthered that narrative.

And of course at the time, in those places, those things remained very white. AIDS was Rock Hudson, and Matthew Shepherd was an attractive blond young man. Spiral inserting race into the story then feels pointed in the right ways -- a necessary reshuffling of the stories about it. So-called mainstream society will find numerous ways of shutting us out from one another -- ever tightening rooms within rooms within rooms -- until we're each staring at the walls and screaming for the exits. And so these horrors twist on and on, tighter around our throats with every generation that leaves them unsaid; cut off from one another. So we should, it seems, speak up whenever we can. No matter how much of an asshole that makes us. 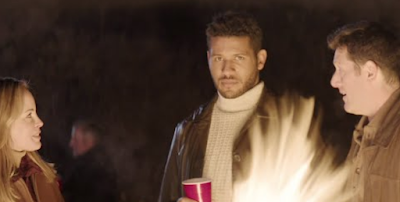