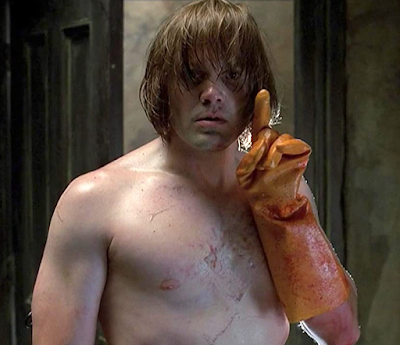 Today is the 20th anniversary of Tarsem Singh's nightmarishly-hallucinogenic horror film The Cell, which saw Jennifer Lopez playing a child psychologist tasked with entering the dream-worlds of a serial killer who's slipped into a coma (played by usual suspect Vincent D'Onofrio) in order to get information on where his last victim, still alive, has been caged.

It's a helluva flick! A visual hammer that sure rips off a million other artists but I don't care, I never did, Tarsem tossed it all together into something spectacular, something we'd never seen on-screen before. And thinking about it this morning has got me angry that he hasn't done anything since his 2017 series Emerald City (starring an oft-shirtless Oliver Jackson-Cohen) flopped. So let's celebrate it with a helluva Cell-centric Sophie's Choice... 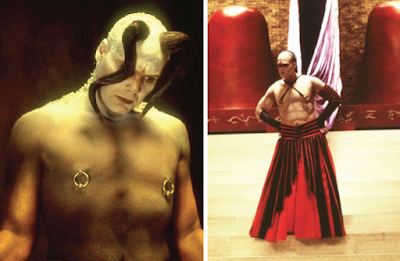 I love love love the Cell. Blew my mind back when it came out, though I drool over Vincent, and as usual, he is too good at getting into his character to lust after him in this one. Does anyone know a VD film that showcases his hotness? I would love to see.

Red God is more cinematic, but Pan is hotter because he's more visceral, plus the nipple rings. (This movie I think started my Thing about men with pierced nipples.)

Shawny, he was in something called The Velocity of Gary with Thomas Jane. Dunno about the movie overall but there is an incredibly sensual and sexy makeout scene with the two of them